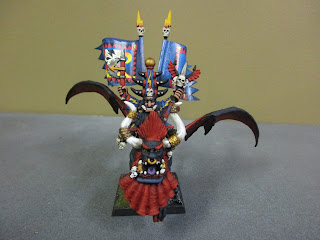 Wow, now here's a blast from the past... a Games Workshop Chaos Dwarf Sorcerer mounted on a mighty Lammasu! My first big "army" project - nearly 25 years ago - was a Chaos Dwarf army for Warhammer Fantasy Battle. 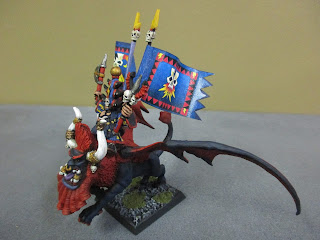 Affectionately known to the Conscripts as the "Big Hats", the Chaos Dwarfs were kin to the Dwarfs of the Old World, albeit twisted and mutated by the Chaos Gods. Having migrated thousands of years ago from the southern lands to the Mountains of Mourn, their empire spans a vast plain known as Zorn Uzkul, or the Great Skull Land. The Chaos Dwarfs have turned the skull plain into an industrial hellscape, crowded with vast factories, open pit mines, and mammoth red-hot forges echoing with the cacophony of pounding hammers and the screams of tortured slaves. 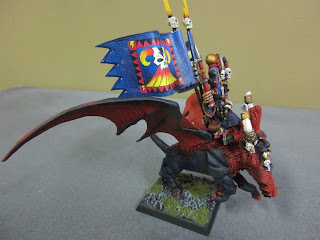 The change wrought by Chaos upon the Dwarfs opened them to the influence of magic, and the leaders of the Chaos Dwarfs are great and powerful sorcerers. The race worships the Chaos bull-god Hashut, Father of Darkness, and consider their magical affinities to be their dark gift from Hashut. 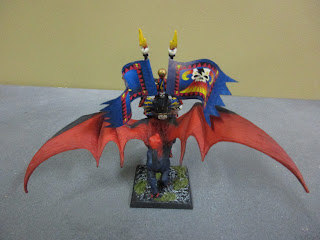 However, the influence of magic on Dwarf physiology invokes a dark curse. As Chaos Dwarf sorcerers grow older and more powerful, their bodies gradually become more stone-like and immobile - gradually turning the sorcerer into a living stone statue. The main avenue of their capital city, the obsidian ziggurat of Zharr-Naggrund, is flanked by ranks of stone statues - all that remains of great and powerful Chaos Dwarf sorcerers. 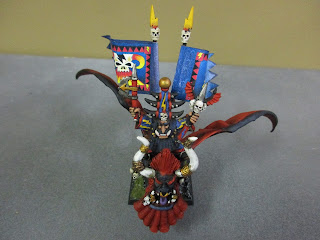 Sorcerers sometimes ride into battle astride a mighty Lammasu, believed to be a mutation of a Great Taurus, itself a massive winged fire-breathing red bull. The Lammasu is possessed of a keen intelligence and breathes not air, but the Winds of Magic itself! 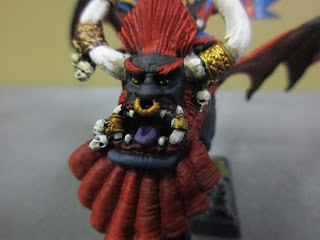 Mutated Chaos Dwarf? You can see the resemblance... 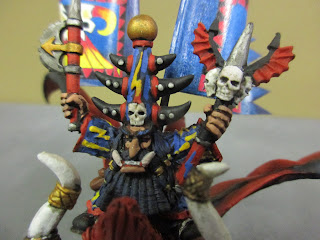 Sorcerer getting ready to do his thing.

So this model has a long history of sitting primed in a drawer! I think I got my Chaos Dwarf army in a huge mail trade back in 1997 or so (I traded a load of Mutant Chronicles models for it and got more Chaos Dwarf models than I'd ever need). The Sorcerer Lord on Mighty Lammasu came in its box and while I assembled and primed it, it had never been painted... until now. Hopefully it won't take 20 more years to get it onto the table, but the way things are going, you never know.

wow, he looks great, I had an opponent in the 90s who had one, they are impressive beasts! Bravo for finally getting him painted

Brilliant work on this fellow Dallas, and congrats on getting it finished!

looks great! Gives hope to the rest of the pile of shame!

Thanks guys! Let's not mention the unpainted unit of Hobgoblin Sneaky Gits!

One of my favourite Citadel chaos minis and you have done it justice Dallas. Smashing work!