Gothmog and the Warg Riders

The Analogue Hobbies Painting Challenge ends tomorrow at midnight, and while I am not an official participant, I have been acting as a 'running partner' for my fellow Conscripts who are in the challenge. Congratulations to all who were able to meet their personal goals. Over the winter, I was able to complete over 196 foot, 14 mounted, and 3 large 28mm scale Lord of the Rings miniatures. This cleared a backlog going back nearly a decade. I had started prepping a group of 34 Games Workshop Rangers of Middle Earth as my next project, but I didn't think I could get them finished in time. I decided to switch to the old metal version of Gothmog, both on foot and mounted, and a box of plastic Warg Riders.
Although there were only six mounted orcs, I always find doing random colours on a group of miniatures challenging. I much prefer soldiers or warriors in some kind of uniform. The wargs were the easiest part of the project since I painted them all the same, followed by the two Gothmog figures. At least they were alike in their paint scheme, but the hodgepodge of orc riders was giving me a headache trying not to paint them in a uniform pattern.
The wargs come with a fur ridge that can be placed on their backs to fill in the gap where the rider would sit, so they can also be used as wild wargs without a rider depending on the scenario. All the miniatures were primed matt black using a rattle can and then painted with a variety of water-based acrylics with lots of drybrushing of highlights. Once painting was completed, they were all given a coat of Army Painter Strong Tone Quick Shade, followed by a light coat of Rust-oleum Matt Clear spray. Here is the final result.
Gothmog, Lieutenant of Minas Morgul, featured in the movie 'Return of the King', commanding the Mordor forces at the taking of Osgiliath, and the Battle of the Pelennor Fields 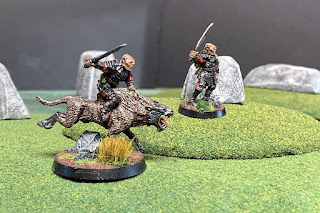 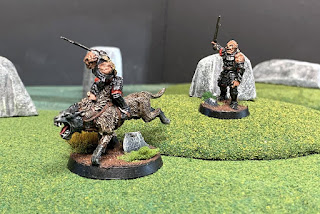 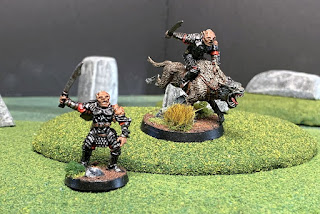 Warg Riders with Bow, Sword, and Spear. The Orcs of the Misty Mountains have some control over the wargs living there 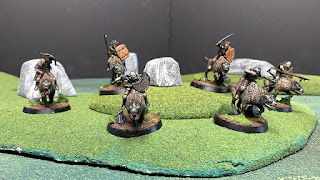 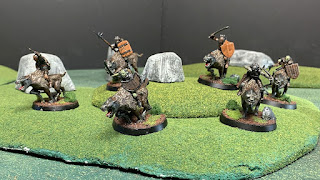 'Wild' Wargs with the rider replaced with a fur ridge. In the Middle Earth Strategy Battle Game, attacks can hit either the rider or the mount. If a warg rider is killed, the warg has an attack ability that is independent of the rider. 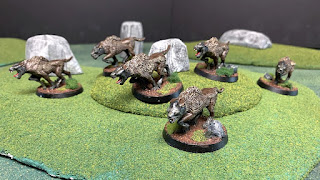 Thanks for reading. Once again, congratulations to my fellow Conscripts participating in the Painting Challenge. The return of nice weather will probably draw me away from my painting desk, but I hope to keep whittling away at my collection of unpainted minis. Cheers.

I think they turned out great. This was my first AHPC but next year I think I will tackle my massive backlog of LoTR figures.

Great work on these guys Frederick!