"Build Me An Army Worthy Of Mordor." - Fighting Uruk-hai 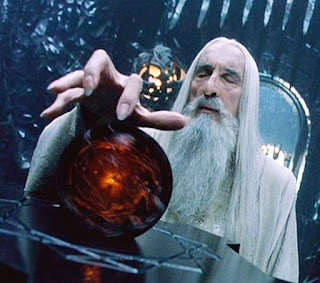 "Build me an army worthy of Mordor"

My last blog post has been almost three weeks ago. Since then I have been working on a Lord of the Rings mega-project consisting of over 100 Isengard Uruk-hai. Some of the figures I purchased new. Half of these I had already based and primed years ago, while the other half were still in their blister packs. The majority were used figures I bought off of eBay from multiple sellers. A few of these were individual figures such as an Uruk-hai Captain, but a lot were a mixed bag of the Games Workshop boxes of plastic Uruk-hai Warriors and Siege Troops with many missing figures. I like to think of them as the survivors of some hard campaigning. All of these required some cleaning up of mold lines, while a lot needed the removal of some of the ground work where it partially covered the feet of the miniatures. A smaller number were going to require some repair to replace missing pikes, swords or shields. Here was my starting point. 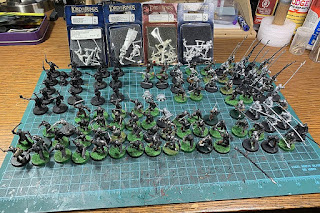 In total I had 3 Captains, 1 Standard Bearer, 11 Berserkers, 18 Siege Troops, 40 Warriors with Sword and Shield, 30 Warriors with Pike, 7 Ladders, and 2 Demolition Charges. I originally had 2 Lurtz figures on the workbench, but put them aside until I start working on my box of plastic Uruk-hai Scouts.

Twelve of the swords had cracks near the hilt where they had been bent but not broken off. These were repaired by the application of some super glue into the crack which made it as strong as new. Three of the sword were missing completely. I replaced these with some hammered floral wire. I also used floral wire to replace the missing part of three pikes that had broken off near the warrior's hand. One warrior was not only missing his pike, but also his right hand and left forearm. These are cast as a single piece and designed to be glued in place. I made a 'right hand' and 'left forearm' from fine wire wrapped around the heavier floral wire of the pike. I drilled out holes in the miniature, glued the fine wires into place, and covered them with epoxy putty. The last repair involved fabricated two missing shields from an old plastic gift card, bending them to shape, and gluing them on. 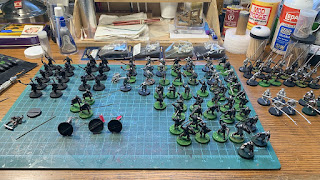 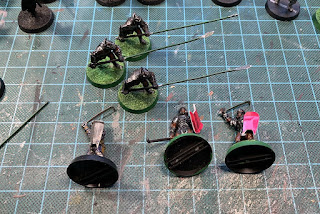 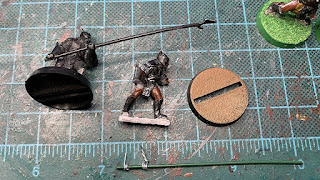 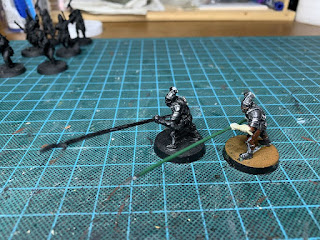 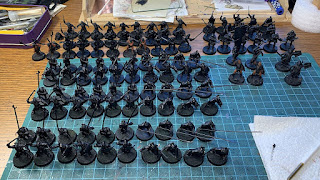 Once everything was cleaned up, and all the repairs were done, all the figures that were not already primed were sprayed matt black using a rattle can. I originally thought I would then paint them all the way through with each colour, but after doing all the skin areas (Vallejo Cavalry Brown) and all the loincloths (Vallejo Leather Brown), I found while doing the gunmetal on the armour that it was getting to be a bit mind numbing. From that point on, I worked on them by subunit, such as a company of 10 pike, 10 sword and shield, and 1 captain. I also arranged the miniatures within each subunit by pose, so that I would not miss painting a strap, or a piece of armour.
When all the painting was complete, all the miniatures were given a coat of Army Painter Strong Tone Quickshade. This darkened all the colours, and gave some definition to the muscles on all the arms, legs, and torsos. It also gave the armour a bit of a grotty look. While I like what it did in these areas, I didn't like the shiny finish that it left on the figures. After doing all the ground work, all the figures were sprayed with a light coat of Rust-Oleum Clear Matt. This took off the worst of the shine, and it also helped to seal the ground work. Here is the final product outside the walls of Helm's Deep. 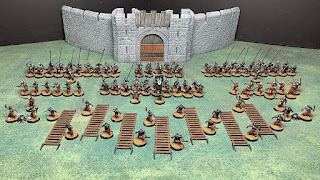 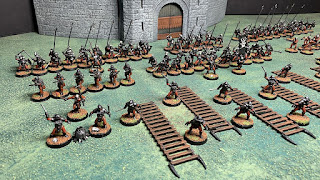 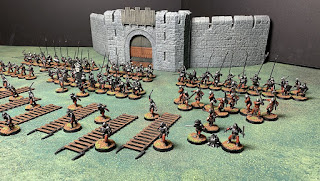 Here are close-ups of the individual sub units starting with Uruk-hai Siege Troops with Ladders. 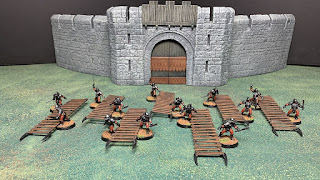 Uruk-hai Siege Troops with Demolition Charges and Berserkers with Torches. 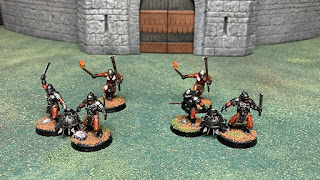 Uruk-hai Berserkers. Five of these are metal miniatures, while the four running berserkers with the two-handed sword resting on their shoulder were converted from the plastic figure running with a torch that comes with the Uruk-hai Siege Troops box. Just to mix things up a bit, I gave the one in the center a severed head to hold. This was done by converting a head taken from a Bandai 1/48 scale tank crewman. 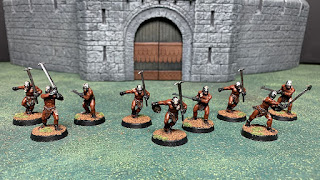 A group of ten Uruk-hai with sword and shield. Some of these had already undergone some repair before I bought them where their sword arm had been replace by one taken from an unidentified metal figure. These got a little treatment from the metal file to take off any detail on the vambrace so that it would look closer to the armour worn by the rest of the Uruk-hai. 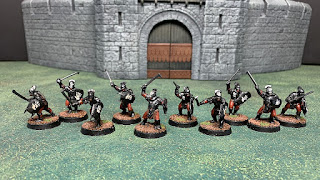 A group of six Uruk-hai armed with crossbows. 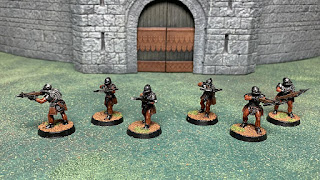 And finally three units of 10 pike, 10 sword and shield, 1 captain, and for one of the companies, a standard. All of these were marked with the 'White Hand of Saruman', some on their shield, some on their helmets or armour. 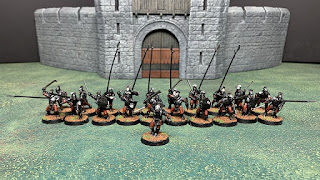 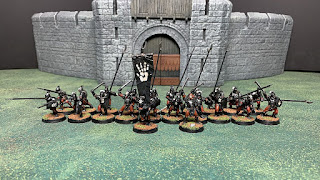 I am really happy with the final results. The first five days were spent sorting, cleaning, repairing, assembling, and priming. Then 10 days of painting, followed by a day each for the Quickshade, the ground work, and the matt coat. The total came to 109 figures, plus the ladders and demolition charges. Now to march to Helm's Deep. 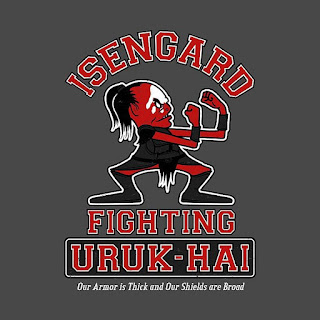 Thanks for reading. Stay safe and healthy until we can meet again across the workgames table.

The gate and walls in the background is a three-piece resin set of Helm's Deep Fortress from Games Workshop. Its footprint measures approximately 60cm x 23 cm. Alas, it is now OOP, but occasionally available in the aftermarket. I have no idea what the current asking price is, but I would be curious to know if anyone has that information.
Posted by Dusty at 8:36 PM

A superb looking force ready to raid into Rohan

Fab looking warband. I love the style of the Uruk's

Congrats Frederick, on getting that whole pile of fixed up and painted - well done.

great stuff, I am a fan of the GW uruks they do paint easily that is for sure

Very impressive! Good job on the refurbishing- they turned out great.