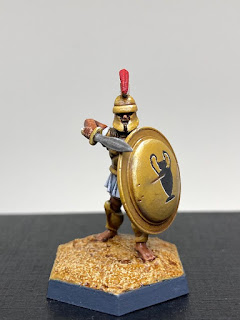 I have been wanting to set up another Zoom game for the Fawcett Avenue Conscripts. I dug out Timothy Peterson’s Roman ‘Arena Combat’ rules, which were themselves a variant of Steve Jackson’s ‘Melee’. Being hex based, it is fairly easy to see how to move around the arena, and how to attack and defend the front, sides, and rear of each other’s models. The models I have available are mostly pre-painted gladiators from em4 Miniatures. This past weekend I also assembled and painted up a Hopolomachius, a heavily armoured swordsman kitted out like a Greek hoplite, with helmet, breastplate, greaves. aspis (large round shield with bronze facing over a wooden core), and gladius.

The figure was assembled from parts from both the Greek Hoplite Infantry and Command sprues, both available from Warlord (ex Immortal Miniatures). For a multi-part figure, there's some nice anatomy in the pose and some good detailing like the suspension rig of the aspis.

I was working fast, so I primed it with Chaos Black, and did a rough spray bomb zenithal highlight with Corax White. I laid the base colours in with various acrylics, using Vallejo's Non Metallic Metal set for the browns, yellows, and white. Finished off with some oils for quick blending and highlighting. The amphora is a decal, applied with decal solvent and setting solutions, and suitably distressed. The front three hex sides of the base are painted dark grey, since facing is a very important feature of the Melee rules. 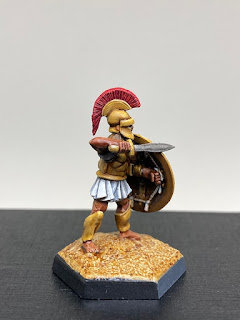 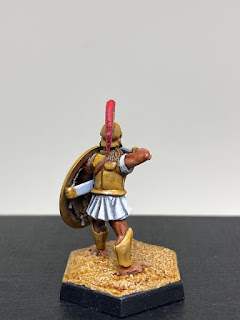 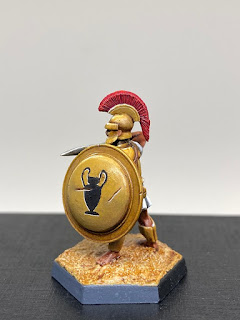 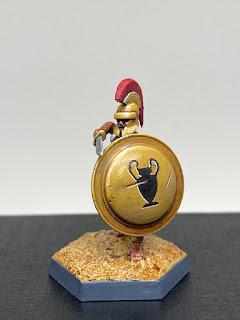 Below, some other em4 Miniatures gladiators on a Melee mousepad style game mat. We had 3 one-on-one fights. No one's gladiator dies, and after a suitable recovery period we had a small battle of the three victors vs. the three losers. 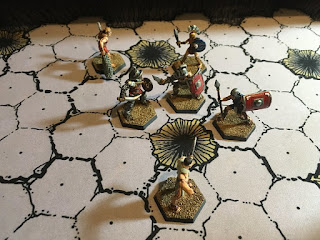 Below, the Hopolomachius seen facing off against a common pairing, a Myrmillus. 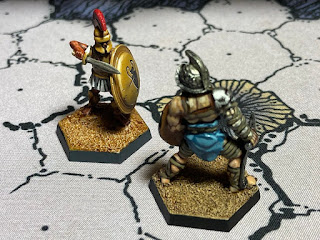