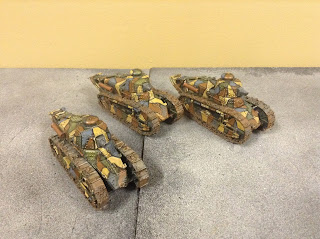 Awhile back I participated in a Kickstarter (sorry Greg) run by a company called Trenchworx. I've heard nightmare stories about Kickstarter campaigns before but I have to say that the Trenchworx KS was run professionally and efficiently. Communication was great and the product was high quality!

I blogged a few months ago about the British MKIV tank I'd painted as a German "beute" panzer. The other vehicles I got were a troop of three Renault FT-17s, which I built and painted a few weeks ago. 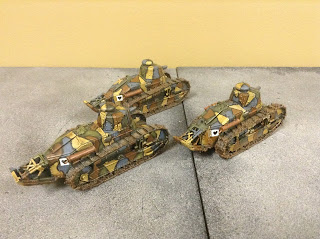 The kits included both a 37mm gun and a machinegun for the turret, and optional trench rails as well. The vehicles were a snap to assemble, and even included magnets for the turret and weapons. 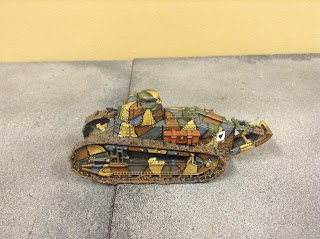 Here it is with the 37mm gun mounted. I painted the tanks in a standard camo scheme with markings for the third section of the second company. There's a handy guide here on the Landships site. 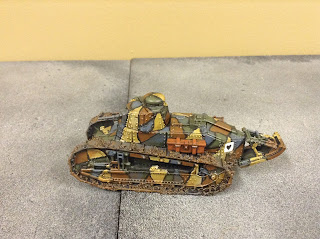 And here's the turret machinegun. 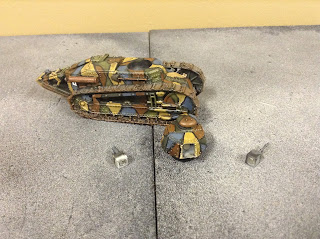 Here it is in pieces. The holes for the magnets are beautifully countersunk into the parts and the magnets fit perfectly. Just make sure you get the polarities correct! ;-)

All in all these are great kits and will look superb on our Great War battlefields. They'll also spur me on to build up my late-war French. I've just finished some work on a group of Foundry models that were painted by our late friend Glenn, and I intend to add to those with more Foundry stuff, including some 75mm guns and crews.
Posted by Dallas at 12:03 PM

Hi there Bartek. The Trenchworx website lists scale as "28mm (1/56)" and I reckon that's about right. I think these are a shade smaller than 1/48.

I have a set of three from the kickstarter as well now I'm energized to get mine together. The Rolls Royce Armored car was a great kit too. Here is the finished product from that kit: http://wargamesandrailroads.blogspot.com/2015/04/trenchworx-wwi-rolls-royce-armored-car.html

Kickstarters like these seem to work great Dallas, and you did a fabulous job on the tanks. Great work.

Stunning work on these little gems. Love the camo.

Gorgeous job Dallas! I plunked down for this Kickstarter as well and I agree, they provided a wonderful product. My plan is to paint my FT-17 for Indochina service where they had a surprising number (though most were made inoperable due to the tropical conditions).

Great looking tanks, Dallas! I like the camo a lot.

I am glad I also got in on this KS. My FT-17 will be in Finnish colours for the Winter War. Yeah, they were dug-in MG bunkers, but still; I just have to make a Vickers MG jacketed barrel for the turret.