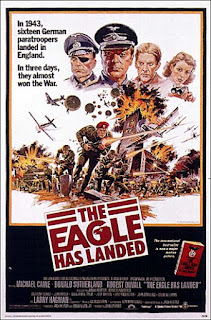 A few weeks back, the nice chaps at Warlord Games published a promotion and scenario based on the classic '70s WW2 movie, "The Eagle Has Landed."

Pretty much every WW2 gamer over the age of 40 is well familiar with the movie, but for those who aren't, it's definitely a classic. In broad strokes, here's the story:

At the height of World War II, Nazi intelligence officer Max Radl (Robert Duvall) devises a plan to kidnap Winston Churchill while the prime minister is on vacation at an English seaside cottage. With the approval of Reichsfuhrer-SS Heinrich Himmler (Donald Pleasence), the scheme moves forward with German paratrooper hero Oberst Kurt Steiner (Michael Caine) leading the mission, aided on the ground by Liam Devlin (Donald Sutherland), a mercenary Irishman with a dislike of the English. The initially preposterous-seeming plan seems more and more plausibly successful with Steiner and his men arriving in England disguised as Polish paratroopers. They install themselves in the sleepy village of Studley Constable to await the arrival of Churchill, but in the meantime their plan unravels when the "Polish paratroopers" are revealed to be Germans. Enter Colonel Clarence E. Pitts (Larry Hagman), a hawkish-but-incompetent US Army officer stationed nearby with his Ranger unit... and mayhem ensues! 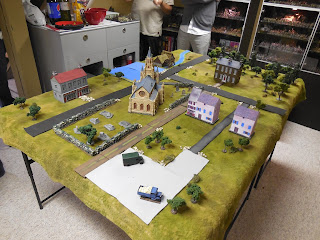 Conscript Curt was in for a visit and I thought we should do something a bit different for the Thursday game. Coincidentally, Warlord Games had just sent an email promoting a contest to win a DVD copy of the movie, together with a very cool scenario representing the final battle in the village, between the US Army Rangers and Steiner's disguised "Polish Paratroopers" / Fallschirmjagers. 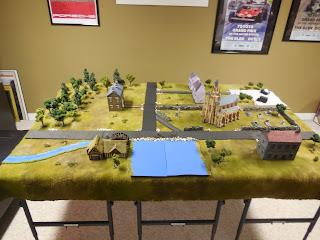 I laid out the table terrain to the scenario specifications, representing the sleepy hamlet of Studley Constable. The church is visible at centre right, the public house at lower right, and the iconic water mill and mill pond at lower centre. 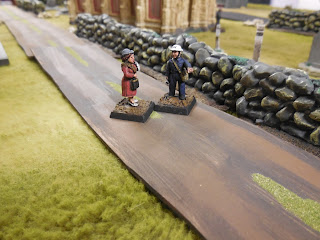 Some of Studley Constable's residents were scattered about the village as well, represented by models from the excellent Foundry "WW2 Civilians" pack. 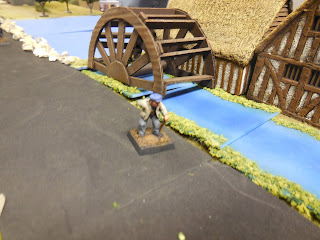 Here's the mill - I made the wheel in an hour out of balsa, and the mill itself is represented by a couple of generic half-timbered buildings. Looks pretty decent for a bodge. 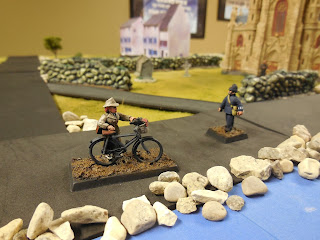 A nice policeman about to have a chat with Mrs. Grey. 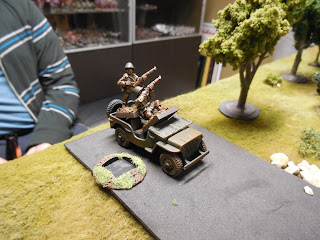 On to the game! It began with the American players moving several jeeps onto the table, led by the extremely enthusiastic Col. Pitts. The objective for the Germans was for Steiner to make his way to the church and for the Germans to hold on there for several turns, allowing Steiner to discover the secret tunnel and make good his escape. The US Army Rangers come on in two waves - a first wave led by Pitts, and the second by an actual competent officer, Captain Clark (Treat Williams). Their objective is to wipe out the Germans before Steiner can escape. 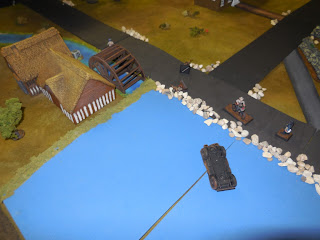 In a spectacular replay of the movie events, two German paras appeared from the mill and hosed down the speeding Jeep with Sten gun fire, causing it to flip over and crash into the mill pond. 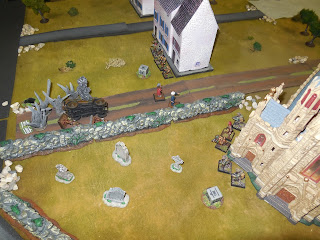 Meanwhile, another Jeep with the Colonel aboard heads for the Church, where the Germans are holed up. This doesn't go well, as the Jeep is sprayed with Sten fire from the Church and a neighbouring building, helping Col. Pitts achieve the hero's death he so richly deserved. 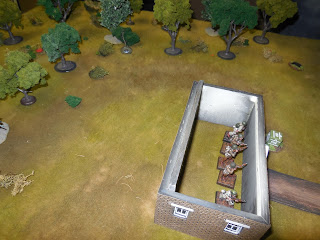 Americans occupy a house opposite the church. 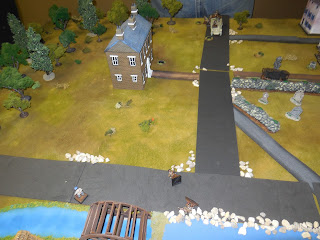 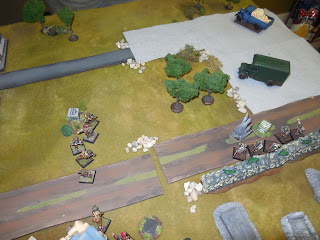 US Army Rangers moving towards the church are intercepted by some Germans with the same idea. 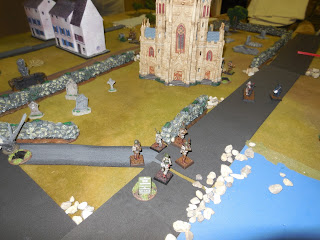 I'm not exactly sure what happened to the rest of the pictures here (where's Steiner???) but the game was pretty fun. Some of the Germans ended up holed up in the church but got whittled down by Ranger shooting. There were some Germans that didn't bother joining up in the church and I think that was likely a tactical error as the Rangers assaulted the few remaining paras and wiping them out... Steiner either ended up in the POW cages or buried in the cemetery in Studley Constable.

We'll run this game again for sure; my wife bought me a very nice laser-cut church model appropriate to the scenario from Sarissa Precision (as well as the "Steiner" figure from Warlord) so this may even be a game we take on the road to PrairieCon next year! 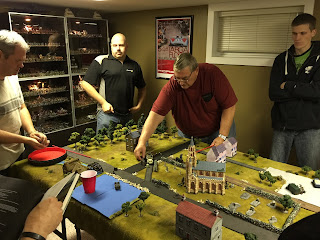 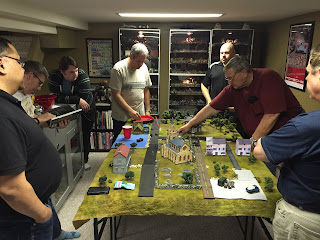 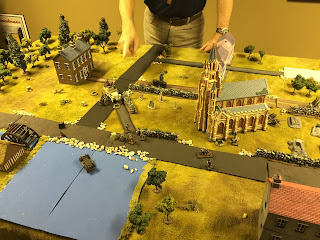 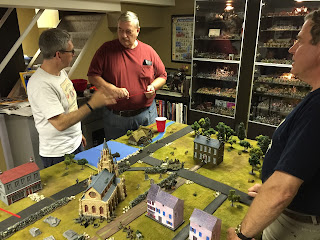 This was a great game Dallas - would sure look great at Prairiecon!