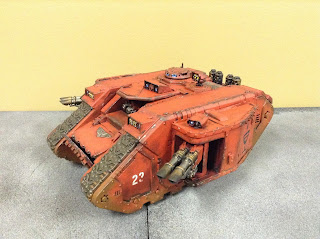 Reinforcements for the IX Legion were coming thick and fast in the days leading up to THE BIG ONE. For me it seems to be easier to get vehicles on the table than infantry (although the Blood Drinkers need more of that too) so I got cracking on the Land Raider kit I'd obtained from Chapterhouse.

They call this kit the "Heresy-era Iconoclast" and it comprises two resin sponsons and a central bulkhead that's used to convert the standard plastic Land Raider. (You can see the CH resin in the photo of the unpainted vehicle below). 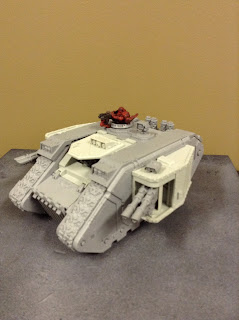 And here it is, before painting. I was a bit concerned that the Chapterhouse kit might need a lot of work to fit, but I needn't have worried. There was a slight warp in one sponson but this was easily corrected with judicious application of heat and some bending. The central piece was a bit wonky as well but I didn't notice this until final assembly. (You can see in the "unpainted" pic that the overhanging plate is angled downwards a bit and doesn't look quite right). I addressed that issue by shimming the top plate slightly to bring it level with the top of the vehicle, as seen in the pic above. No worries. 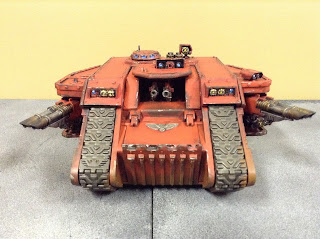 I've built three Land Raider kits so far I think, and this is the first one where I've gotten the ramp to work properly. The problem I've always had is that the connecting rod inside the hull slips off its cams. I fixed that on this build by shimming out the rod so that inward pressure on it from the hull keeps it engaged with the cams. 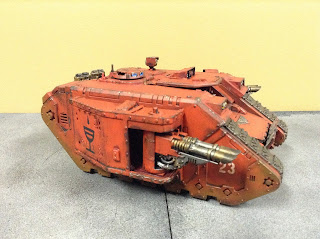 The lascannons were straightforward as they just slot into the sponson cylinder. I sawed off the ends of the lascannon assembly to get an aesthetic fit. 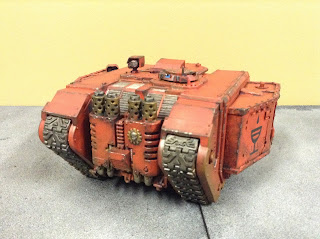 Nothing to look at back here - just the standard GW Land Raider. 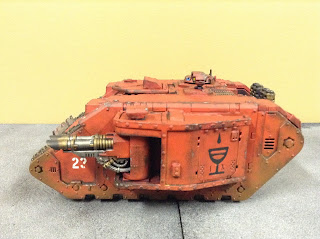 Side elevation show the Chapterhouse conversion to good effect. They supply doors for the sponson that fit well with just a bit of trimming. 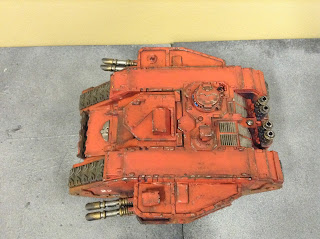 I did a standard Blood Angels paint scheme with Khorne Red building up to Evil Sunz Orange, with Nuln Oil wash, sponge chipping and moderate use of powders. 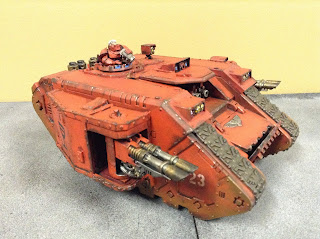 Some "battle damage" evident already as I didn't have an extra targeter to use on the right-hand sponson - I'd forgotten that I'd already pinched it to use on the Spartan :-(  In any case, one will be procured from eBay and fitted. I drilled through the top of the sponson and fitted a bit of plastic rod so the targetter will rotate along with the lascannon array. Has to be good for +1 to hit, right??

Anyway... fun kit to build, I think it looks pretty good in evoking the whole "MKIIB - Heresy" vibe. The kit from Forge World is 69GBP plus shipping - that's about 150 Canadian pesos. The Chapterhouse kit is 25USD, and I think the base Raider cost me about 60USD shipped, so that's 85USD or what, 120 Canadian or so? Not a huge difference and like I said about the Chapterhouse Rhinos, it really makes sense if you have access to cheap GW plastic. Looks cool though eh?
Posted by Dallas at 11:08 AM

Excellent job Dallas - it's a great looking vehicle. I really like the huge sponsons on this kit, they really help reinforce that this is an early model of the Raider. Very cool.

Great work on this Dallas, it's a beauty!