We're Terminators, We Don't Do "Objectives". 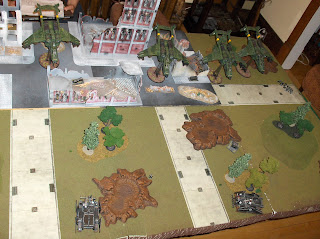 Last night Greg brought over his amazingly painted Elysian Drop Troop army for a game of 40K against my Black Templars. (Further amortization of the Stalingrad terrain was an added bonus). The random scenario we dialled up involved placing four objectives on the table (the ammo canisters visible deployed in a rough square around the middle of the table: in woods at centre left; directly north of this location in a ruined building; straight east of that on a sidewalk; and due south of that on the southern lip of the crater). The player who controlled the most objectives at the end of the game wins. 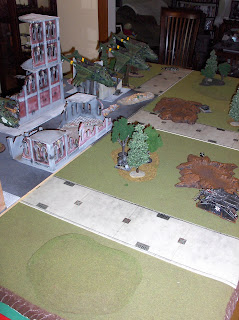 Deployment was funky as well: table halves with up to two Troops and one HQ on table, the rest coming either from Reserve or directly on-board on Turn 2. 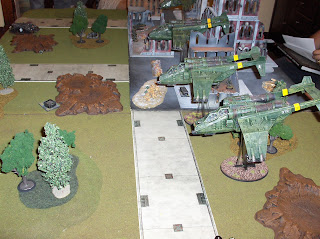 Since the Guard are organized as "platoons" that meant a lot of stuff on table for Greg; for me, not so much. Just the two Rhinos, each with a full complement of Templars and one also containing the Emperor's Champion. These I tried to deploy behind a bit of cover. 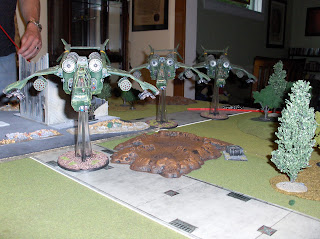 My plan was to leave the "sidewalk" objective and try to take the others. My whole army moves fast (Rhinos, Land Raider with Terminator Squad, Landspeeder with multi-melta, Assault squad and Chaplain with jump pack) so I didn't fuss with Reserves, just brought everything on in Turn 2. I counted on Greg's almost pathological hatred of the "Reserves" rule to cause him to do the same. 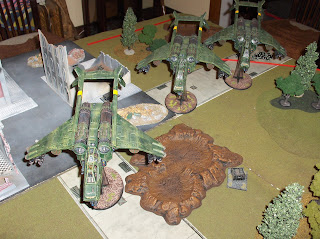 Just out of shot to the south-west, the first Rhino has been immobilized and the Templars have scurried into the woods containing the objective. They were quickly vaporized by the Punisher cannons on the Vulture gunship. 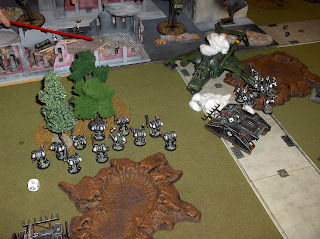 The Assault squad jumped into action and tried not to be too disturbed by the chunks of oolitic kidney, Larriman's Glands and tri-bladders scattered around the woods :-( Over to their right, the other Templar squad hops into the crater after destroying the Valk with a melta-shot. 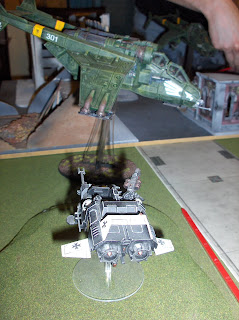 The valiant Landspeeder crew zoom their vehicle up to a Valk for a multi-melta shot. Missed as usual, the next turn the Speeder crashes in flames. 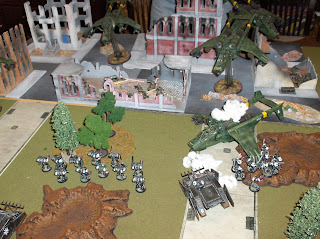 Not going so great for the BTs at this point... if we could only get into close combat... 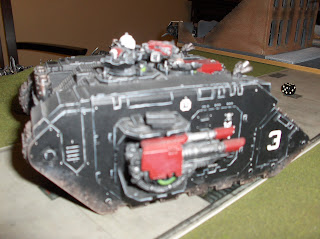 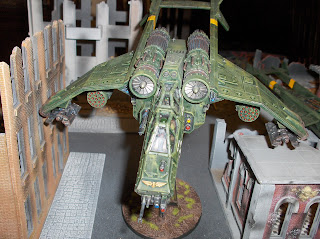 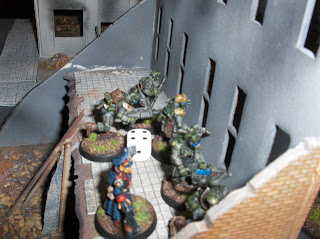 Greg's platoon command watches as the sniper squad and Company command in the ruined building get trampled by my Assault squad. The Land Raider had immobilized the Vendetta but its Punisher cannons were still in operation... so the Assault Squad ganged up on it with a power fist, meltabombs and krak grenades... and the best result was "Immobilized". At least we rolled 5 "3"s and got rid of the weapons. 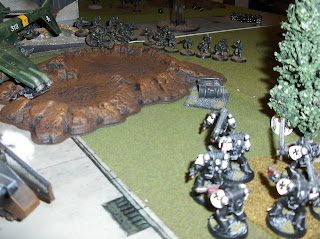 Off to the left the Terminators have disembarked onto the objective in the woods. The guys in this picture have just been shot up and fled from the crater (failed their "I'm an insane Black Templar who runs forward instead of Falling Back" test). 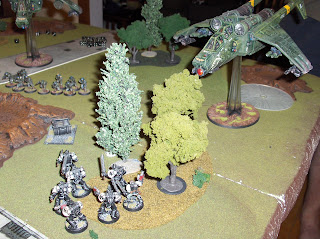 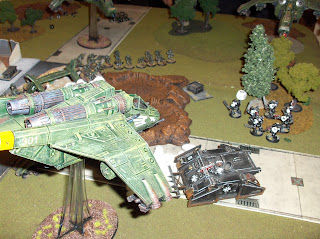 These guys got shot up some more and then ran forward into one of the Elysian squads near the objective, killed that squad, then got shot to pieces as usual :-(

Meanwhile, on the other flank, the Assault Squad was holding one objective and the Terminator Squad another. Despite some appalling dice rolling and getting shot to bits by Guard, it looked like a win was on the cards for my boys... that's when a horrible realization began to dawn on me.

I imagine the Comm-Net transmission went something like this:

Chaplain Cadfael: Black One Actual to Terminator Squad, come in.
Terminator Sergeant: You have Sergeant Augustus here, over.
CC: Augustus, are you on Objective Alpha? Hold that objective, over.
TS: That's a negative, Black One. No can do.
CC: Say again, Augustus, I think we've got some interference on the net. Over.
TS: Repeat, no can do. Negative. Can't hold the objective. We're going to go shoot at some Guardsmen in a building now, over.
CC: Augustus. I have a fething shart-show situation going on here. I'm with the Assault Squad, we're on an objective, the battle is almost over and I've been told that we can't hold it because we're not "Troops", whatever that means. So we have to jump away and try to kill the rest of the Guard army. So I need you to sit on that fething objective and hold it. Am I making myself clear? Acknowledge!
TS: Umm, yeah. It kinda turns out we're not Troops either. Sorry. 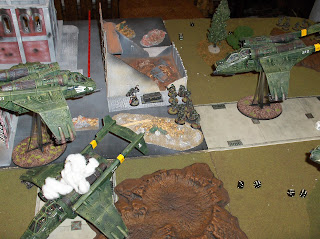 So with that disappointing realization (on Turn 6 no less) I had to move the Assault Squad over to near the sidewalk objective and try to contest that for the draw. The Assault Squad did great, cleaning out a squad of Elysians while losing one of their own. Then they parked on the objective and waited for Brian to roll the die to see if there would be another turn (only on a roll of 4+)... and he rolled a 6. Crap. So, pictured above is the last stand of Chaplain Cadfael. He finally fell to the lascannons of a Valkyrie... had three wounds left, took three from the Valk, saved one with the Rosarius, but "Instant Death", like Instant Karma, is a killer. The Terminators threw a last gasp rattle of gunfire at the remaining Elysian squad, hoping to frighten them off the objective for a draw, but it was not to be as only one wound was caused, not enough to force even a Morale check.
So that ended the game! Pretty exciting, had ups and downs, good fun with nice terrain and good-looking armies. And beer! Thanks Greg for bringing the boys out. And yes, you do need another Vulture with Punisher cannons. [rolleyes]
Posted by Dallas at 9:41 AM

I can only imagine the language being uttered on turn 6... You really need to play your own scenarios that are not based on these byzantine conditions that have been designed for tournament play. Objectives can't be held by 'non-Troop' units? Gimmee a break...

Yep - the 40k rules in all their glory. Good thing we grabbed that ammunition cannister. Definitely a Thorpian outcome.

I'm surprised we lasted at all. While the Punisher Cannons are stupendous, the rest of the lot really struggled with the Land Raider, Assault Squad, and Terminators.

Were it not for the obtuse rules in question, we would have lost for sure!

Thanks for posting the great writeup and pix. Sorry I couldn't attend, we were at my in-law's place.

RE: Scoring units:
the 40K 5th ed. mechanic was designed to force players to take and use basic troops, not just the killy stuff. I suppose it is analogous to WWII panzer forces seizing a position, which is then consolidated upon by follow-up leg infantry.

That being said, other sci-fi rules sets (such as Mantic's new "Warpath") don't make such artificial distinctions between what types of units can control objectives.