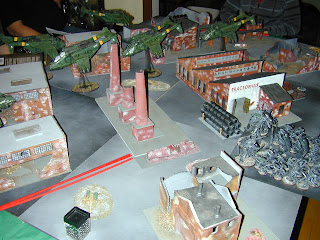 Last Thursday Greg brought out his Valk-heavy 1500 point Elysian Drop Troop army out for a game against Hive Fleet Nostromo, my Alien-style Tyranids. It was simultaneously the first outing for Greg's gorgeous army ﻿and for my new-to-me "Stalingrad" resin terrain, this time standing in for the embattled Imperial planet Toxo IV. 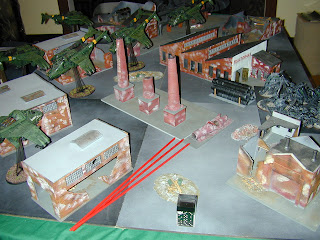 Greg's Valkyries and especially his Vulture (Vendetta?) certainly brought the pain with twin-linked Punisher cannons (20 shots re-rolling misses?!?!) but we had similar luck with bringing on reinforcements... "what did we say? All at once. What did we do? One at a time." ﻿ 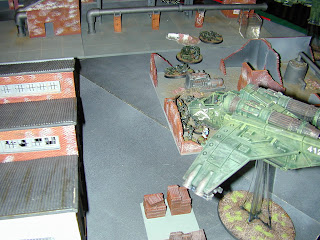 The game ended on Turn 5 as a draw as we both held our own objectives, uncontested. A couple more turns of play would have been interesting - I had an undamaged Trygon set to eat some Guardsmen while Greg still had some mobile troops in Valks flying around. But it was great to see his lads out and to use the new terrain. Regarding the latter, I'm all about cost amortization, so look for many battles to occur in the sump factories of Toxo IV, the ruins of Grozny, and the industrial area of New Putingrad, as well as in Stalingrad ;-)﻿ 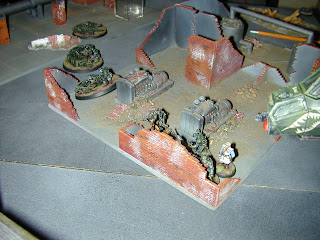 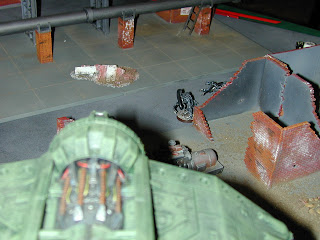 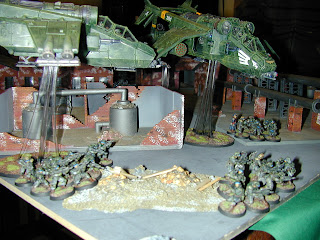 If only my !@#$!@#ing drop infantry platoon (and accompanying Valkyries) had been able to make an earlier entry...

Thanks for hosting Dallas. The terrain is awesome, and I know the amortization process will bring a lot of great gaming.

Both the terrain and the models look great. Happy baptism of fire to both.

Sounds like a great time. Cool new scenery, Dallas. Both of your armies look great. The first couple of shots make it look like a perverse 40K meets Pac-Man or Dig Dug game.

Thanks for hosting, Dallas. I look forward to seeing more of this terrain.

Greg, again, great job on your Elysian force. (You really need to play "Ride of the Valkyries" when you deploy you air cav.)