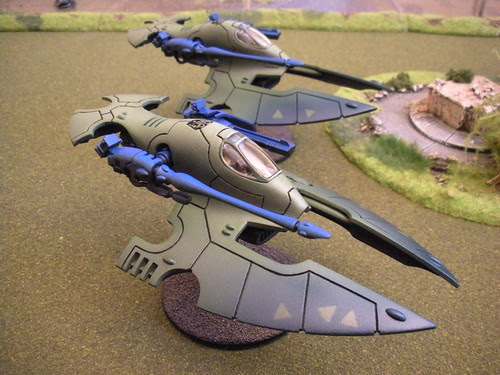 The main upper hull (cockpit, wings and tail) is all one piece; very nice. However, the models had lots of little surface imperfections that had to be filled or carved off and then sanded. The kit comes with a pair of resin pulse lasers (incorrectly described in the kit instructions as bright lances - the kit also has a plastic sprue containing such a bright lance). The pulse lasers looked like wet noodles. I replaced two of them with plastic parts from my spares box and mounted them on the right hand weapon mounts; I added plastic scatter lasers on the left weapon mounts. 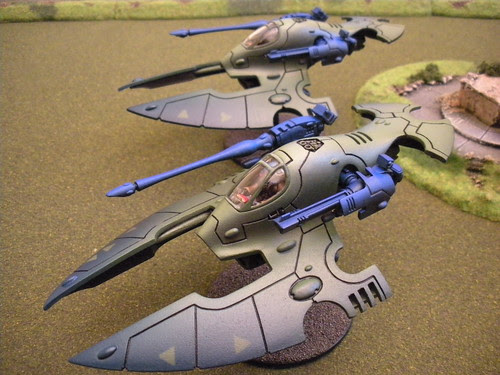 The resin pilot figure is very nice, including an interesting helmet; it is a much better fig than the one provided with the Nightwing fighter. 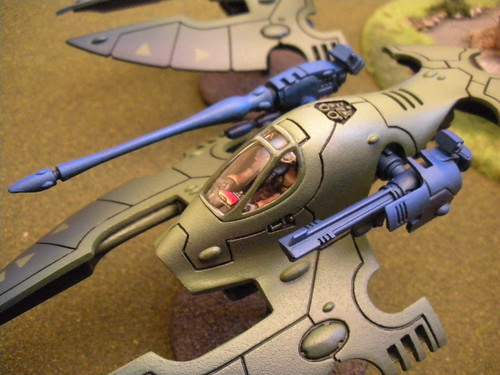 I thought at first that the hull sides were too dark, but now I think that the contrast between highlight and shadow turned out better than on my other Eldar tanks. 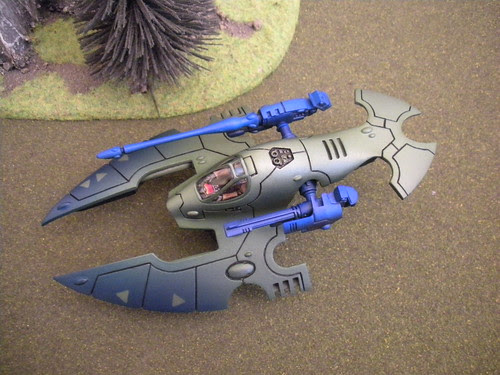 The Hornets have replaced the Vyper jetbikes in my Swordwind tournament army for next month's Astronomi-con Vancouver 2011 40K tournament. The skimmers have already seen action against Duncan's Thousand Sons. (Thanks again for the fun game, Duncan!)

The move from AV 10 to AV 11 is huge; whole classes of basic infantry weapons (bolters, splinter rifles, shootas, shuriken catapults, etc.) can no longer damage this light gunship. The other rules for it (like Scout, closed top and Star Engines) really seal the deal. The only downside is the cost of the heavier weapons, such as the pulse lasers.
Posted by DaveV at 4:48 PM

They look amazing, us per usual. I look forward to facing them soon.

Great job Dave. I can sympathize with the experience of dealing with Forge World "quality".

You might not have the only Hornets at Astro Van. One of the local Eldar players has a pair. His are painted Black and Yellow, whatever craftworld that is. They were in his tournament army at Trumpeters Salute...