Well, Mike F and Dallas have been kicking my but long enough - it was time to dive into the 15mm Sci-Fi new insane project. I finally got moving this weekend, finishing off a small group of test models. The infantry are 15mm Federal troops from Khurasan. The vehicle is a 15mm "Claymore" APC from Old Crow. 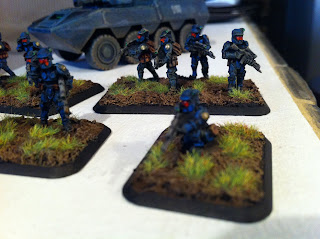 When you're in a hurry, keep it simple. That was my motto on this project, so I went with the same blue-themed colour pattern I use with my Imperial Guardsmen in 40k. I used red for the face plates, to give them a touch of that plesant look/feel you get from those happy troops with the Helghast Empire. 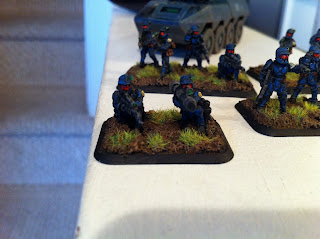 The Khurasan 15mm Federal Army troops are really nice. The castings were a bit flash-happy, but nothing the hobby knife couldn't handle. One of the things that happens with test models is that you screw up. Like thinking the guy with the SAW is a sniper. Whoops. So that will be the only stand-alone SAW gunner. I'll straighten that out eventually. 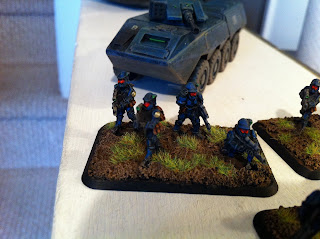 The 15mm vehicles from Old Crow are an absolute joy to assemble. Old Crow has a great selection of vehicles, and different alternate turrets and weapons. I have four of these "Claymore" wheeled APCs - they make me think of a sci-fi version of an LAV. I have three of the vehicles with auto-cannon-type weapons like this one, and one with a small snub-nose howitzer for the weapon. I also have a "com-cent" turret that I can drop on to one of the vehicles to mark it as a command APC, or a FO/FAC vehicle.

My decal supply is a bit scattered - we are preparing to move, and a lot of stuff has been packed away, not to be seen for a couple months, but fortunately I had some spare Battlefront German decal sets which provided for tactical numerals and strange panzer division symbol that will stand in as a unit badge. I used the black tactical numbers to avoid confusion with the red ones employed by Gilles. 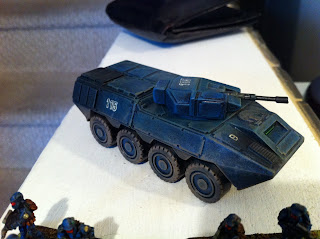 I still have some 15mm "Control Batallion" models from Khurasan (some of the nicest 15mm castings I have seen!) to get started with, and some other APCs and tanks. I'm way behind Dallas and Mike F, but working to get caught up! Watch for more progress in the blog...
Posted by Greg B at 8:18 AM

Outstanding! Can hardly wait to battle against these guys.