Last year, on a business trip to Toronto, I went to the Hairy Tarantula's "warehouse" store in the north end for a look-see.   It's basically a huge basement filled with old gaming junk.  Lots of RPGs (I picked up a copy of Chaosium's "Superworld") and some miniatures too - mainly old OOP ranges like Warzone, Legions of Steel, etc... then I spotted this bad boy sitting amongst a bunch of other junk...

It is, of course, the UNE Superfortress Colossus from Global Games' Legions of Steel range.  All metal, it weighs in at a hefty 2.2 lbs (!).  Meant for a nominal 28mm scale, but I think that the aircraft nose glazing makes it quite plausible to imagine a crew of three or four 15mm figures in the nose.  Of course, at the time I bought it I had no inkling of doing 15mm sci-fi; I'd meant to use it with some Rogue Trader stuff, maybe as a Dreadnought or similar.  I had always thought that this was a really cool model, but it's well OOP... there's not even much info on the 'net about it.  I picked up this example for 10 bucks as it was missing a part - the left hand weapon - which I replaced with a 40K lascannon I had spare.

Here's a comparison shot of the basecoated model alongside the Rebel Minis "Merka 5" tank and a couple of their Earth Force Marines.

The painted model.  Like the other 15mm sci-fi vehicles painted by Gilles, the walker was basecoated grey and camouflaged in a Graveyard Earth and Iyanden Sun mix, washed with Badab Black. 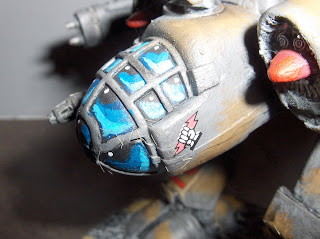 Cockpit detail - sorry about the %$#^ stray static grass.  Decal courtesy of a spare 40K IG decal sheet.  The tactical numbers came from the decal sheet supplied with the GeeBee Racer model that supplied the base model for my Red Barun conversion.  The national symbol of the faction (just visible on the top of the starboard wing) was freehanded - it's based on the tactical symbol for the German 15. Panzerdivision.
I'm pretty pleased with how the model turned out.  I think that it fits quite nicely with the my Earth Force 15mm army - probably better than it would fit with 28mm!
Posted by Dallas at 11:36 AM

Very nice, and it looks quite imposing over that Merk'5.

I wonder if something similar could be kitbashed from 1/100-1/144 scale planes and some legs?

That is a beast, it looks awesome!

Looks sharp! Thanks for reminding me of my LOS stuff weeping for playtime. I use AT-43 Kolossus for my Formicidaes as well as a Star Wars transformer AT-TE.

I didn't really like this model for 28mm, but it looks great for 15's.