Last Thursday I brought out Ludus Gladiatorius (Eng. trans. "Gladiatorial School") for a second evening simulating hand to hand combat in front of ancient Roman citizenry. Conscript BrianH also brought along his magnificent Roman Colosseum model within which we staged the proceedings. 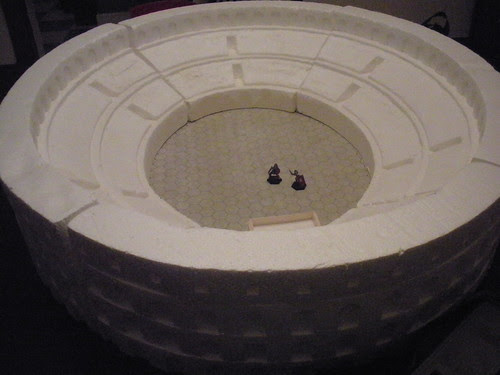 The game was re-scheduled since I was away in Las Vegas for the Throne of Skulls tournament and a long-awaited vacation with my loving wife, Conscript-widow Jen. I shall shortly post batreps of my 40K games at the ToS (really!).

Before we started playing, we had an interesting discussion about gladiatorial combat in the Colosseum (or, the Flavian Amphitheatre). Due the the high cost of training and maintaining elite gladiators, combats did not inevitably result in death. In the later period, sparing of a defeated gladiator's life was common. The construction of the Colosseum itself was also discussed. When Jen and I visited the Colosseum in Rome last year, we learned that the building was originally faced with limestone, which would have provided a gleaming appearance.

As a change from the regular mechanics of Ludus Gladiatorius, I used cards to determine initiative when there were more than two gladiators active on the arena floor. I obtained card templates from the Boardgame Geek site. I used the files named "Ludus_CARTE_iniziativa.pdf" and "Ludus_CARTE_retro.pdf". I just printed out the initiative side and one of the backing sides on the two sides of a single sheet of paper on my home printer, cut out the cards, and placed them in clear plastic card sleeves.

Also, we used fan-made character sheets from the Ludus Gladiatorius Yahoo Group page. The new sheets allow one to write what Special Action (if any) their gladiator uses every turn, and they simply illustrate all the rest of the required stats. I used the file named "Ludus_Schede.pdf".

We started with a two-on-two battle, involving (respectively), Conscripts Brian and Frederick teaming up, vs. Dallas and Indo. The game characters used were as follows:

Brian and Frederick had the best swordsmen. Dallas had a tank - Thrax is very tough and hits fairly hard. Indo ran a character from the second set, Ludus Gladiatorius 2. The Criminal is interesting; he hits very, very hard, but his basic defense is very bad (no armour!). After the initial fight, the winners and losers would square off in a pair of one-on-one fights, then the winners of the A and B side would face off to determine the event champion.

In the photo below, Brian and Dallas can be seen contemplating their tactics. 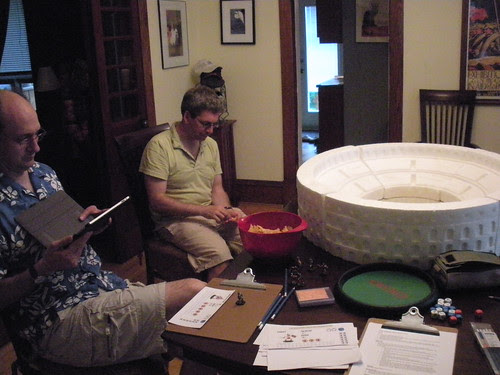 Initially, the fight devolved into a pair of single combats. 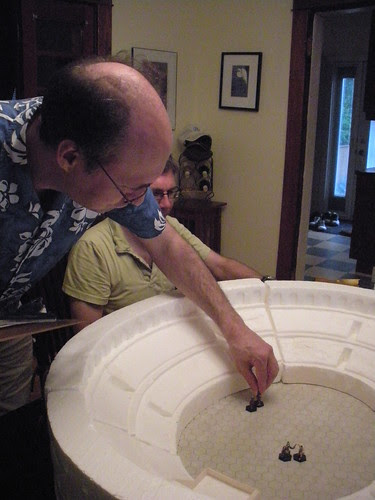 The teams regrouped for mutual support. 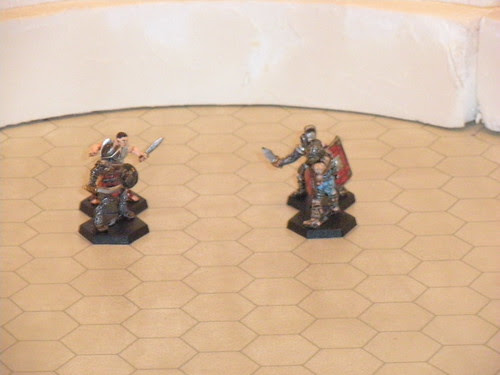 Then, Thrax and the Criminal ganged up on Vescen. 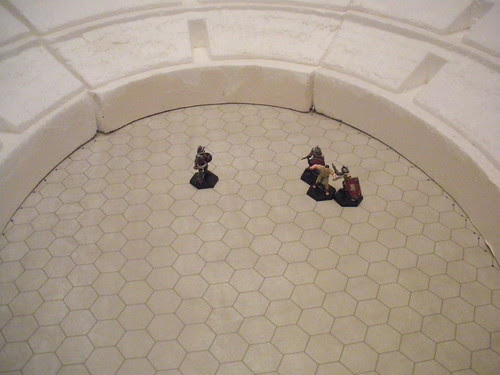 After Vescen fell, it was only a matter of time until Marcus was defeated, too.

The single combat portion of the evening started, resulting eventually in a win for Thrax, who defeated Marcus in the finals. 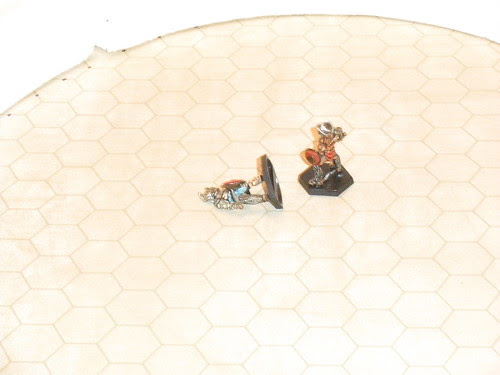 The evening was still young, so we decided to play a Battle Royale - five gladiators in the arena, no allies. For this last game I ran the Amazon - lots of tricks up her sleeve (e.g. she can Feint and Dodge in the same turn), but low on hit points and raw combat power.

We started the models more than 5 hexes apart. Below, Indo places the Criminal's figure on the sands. 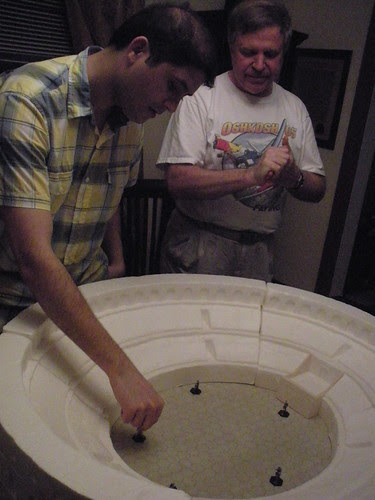 Dallas' Thrax had a reputation for toughness - if memory serves that character cleaned up the previous time we played. Below, Dallas rolls the dice for his man. 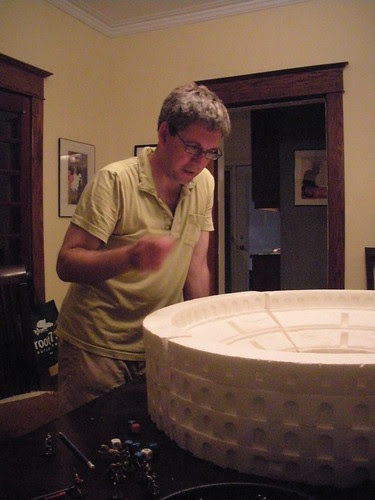 Thrax' reputation was well-deserved. Eventually, it took three of the gladiators teaming up together to knock Thrax out of the fight. 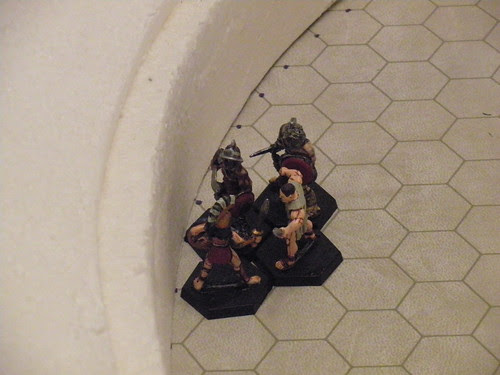 Putting down Thrax had left the Amazon with only one hit point. However, she spied the Criminal leaving himself open as he performed a Savage Attack upon Marcus. She sneakily stepped up to the momentarily defenseless Criminal, and cold cocked him. 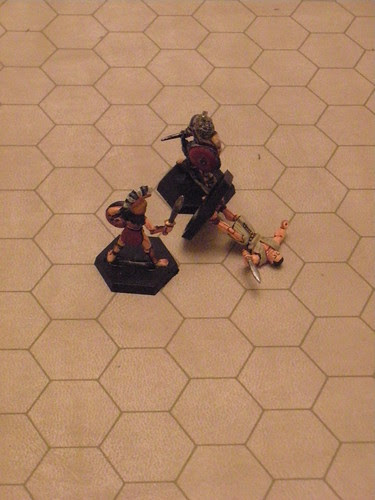 As a gesture of thanks for the assist, Marcus then dueled the Amazon. Her luck held out for longer than I would have thought, but she finally succumbed to a combination of Marcus' dazzling swordplay and the heat of action. 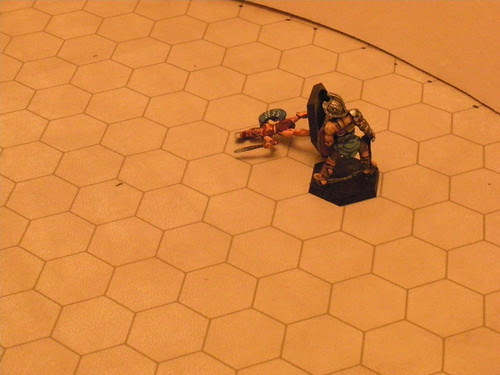 This left Vescen and Marcus to vie for the coveted Rudis (a special wooden sword given as an achievement). Vescen had wisely stayed aloof from the scrum around Thrax, and remained relatively fresh, whereas Marcus was already badly wounded. Dicing each turn for initiative, the two gladiators engaged in a long passage of arms. Finally, Marcus' wounds and fatigue told and Vescen forced him to submit.

Below, Frederick looks down upon his victorious gladiator. 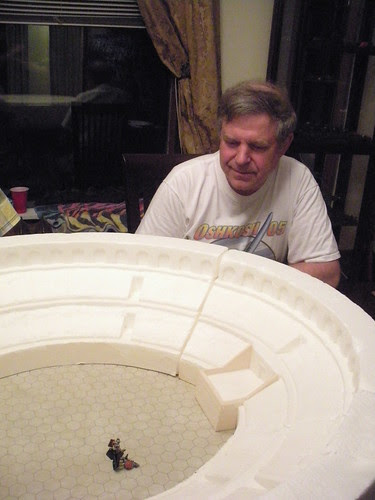 A fun evening was had by all. Everyone agreed that the cards worked well; better than the chits provided in the original game.

Thanks to everyone who came out, and, as always, thanks to Pam and Dallas for hosting.

I demand drug testing for Thrax aka "Lance Armstrong"...

Great games, Dave, thanks for putting them on.

A good write up and intro into for this game most of us have never heard of. The Colosseum is a very nice terrain piece, it captures the feel of areana combat yet appears to be very functional/playable.

Looking forward to your ToS coverage I'd seen your army in a slide show of pictures. Amazingly enough a regular player here in Kelowna won best painted on the 40k side of things.
http://allouttabubblegum.wordpress.com/category/army-showcase/

Spifferson, thanks for the comments. Brian's Colosseum is always a crowd pleaser. He also made a Roman Hippodrome within which we staged chariot racing games.

I was able to meet Marshall and got some close up photos of his army. Thanks for the link.

I'm finishing up my batreps for Astronomi-con Winnipeg, then I'll dive into the ToS.