Wow - the progress in the painting challenge has been awesome. It's too bad Sylvain is putting all the effort into painting wood elves, but still - wow! Great job everyone.

My output has been limited lately as I have changed jobs and been pretty busy, but the NFL is still a reliable painting enabler and last weekend I finished a clutch of fresh Elysian infantry. 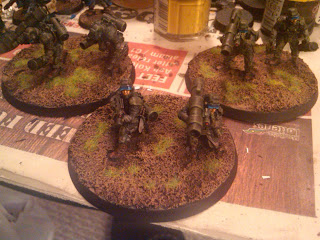 In my first game with the Elysian troops, I was stung by a lack of heavy firepower. Of course, the Valkyries and Vultures are supposed to do that, so I clearly need to get those painted. But I thought some missile launchers might not be a bad idea. Assembling these was a major pain, but I'm pleased with how they turned out.

I have also been working on the senior officer and command squad for these guys. Some time ago I re-purposed an old Rogue Trader captain, and I thought I would keep the theme up for the senior command group, so I used a Rogue Trader standard carrier for the regimental standard (which I hope Brian will develop....). 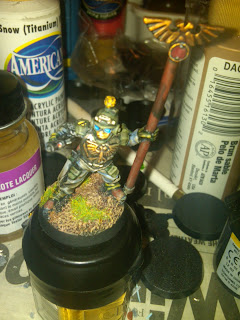 Thankfully the proportions of the old Rogue Trader models and current Forge World Elysian are not too far off!

Up next is a set of Elysian heavy bolter teams. And then, it's time for the Valkyries...some good NFL games this weekend, so hopefully I will have more to report (and more points for the challenge!) soon.
Posted by Greg B at 3:41 PM

These guys really are looking good, and its nice to see some old guard models getting some use too! He's going to have fun getting that banner in the transport though, maybe it has a telescoping pole! ;-)