I've been beavering away at the painting desk since getting back from vacation and here are the completed results to date. The first unit is a oddball battalion from the Napoleonic French army. This is the Prince of Neufchatel's Battalion better know as 'The Canaries'.

In 1807, as a reward for his service to the Empire, Marshal Berthier was made Prince of Neuchatel (or Neufchatel), which is a small principality in what is now Switzerland. He mustered enough troops to create a battalion and had unique yellow uniforms tailored from his own designs. The 'Canaries' fought in 1809 at Wagram and were then transferred to Spain for anti-guerrilla duties. They were recalled in late 1812 as reinforcements for the Russian campaign but only made it to Smolensk where they met the retreating Grande Armee that was tumbling back from Moscow. The battalion suffered terribly during freezing rearguard actions and when it finally crossed the Berezina there was only one officer and seven men left of an original fighting strength of around 660. They were reconstituted in 1813 but after the Leipzig campaign it ceased to exist as a fighting force.

The next unit is the 1st battalion from the 2nd Regiment of Ligne. This regiment has the unique distinction of having served as ship-borne troops in the Battle of Trafalgar.

In 1809 they also fought against steep odds defending the village of Aspern at the two-day battle of Aspern-Essling, and were again heavily engaged during the Battle of Wagram less than two months later. They participated in all the major campaigns right up to Waterloo. 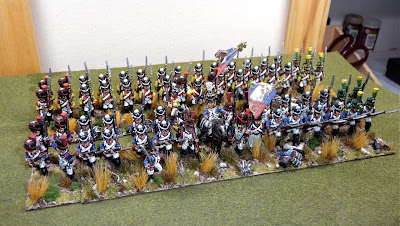 I really like having the plastic 'bitz' around from the Victrix and Perry boxes. I've been scattering my groundwork with battlefield detritus (broken muskets, abandoned packs, shakos, helmets, etc.) which helps bring the units more to life. Some of the stuff required a bit of trimming , shaving and drilling but I like the effect. In so far as the Fall Painting Challenge is concerned I'm not counting the first unit as I had just started them before I left in September so they fall outside of the Challenge parameters. Nonetheless, the second unit is for the books (32 foot and 1 mounted). Now, back to the table...
Posted by Curt at 2:14 PM

Dude - that is AWESOME.

Superb models. Hope you'll treat us to a game with these battalions some time soon in the future.