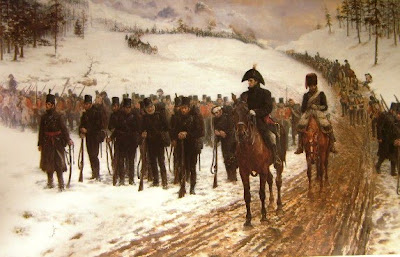 "Waddya mean we have to paint more crap for this battle...?"

Two weeks ago we were visiting our good friends Amy and John Bertolini in Saskatoon and I invited John to come down to Regina to play a game of 28mm Napoleonics. On the drive back home I thought up a small scenario we could do, but to pull it off I needed to rebase and finish off my lone British battalion, complete another, do-up a couple artillery pieces with crews and come up with command stands for both sides. A tall order but I've always liked working with an objective in mind and I really wanted to try out the 'Black Powder' set of rules. I had most of the stuff on-hand from past purchases except for artillery which I quickly ordered from North Bay Hobbies. So brush in hand I dug-in for some marathon painting and here are the results. 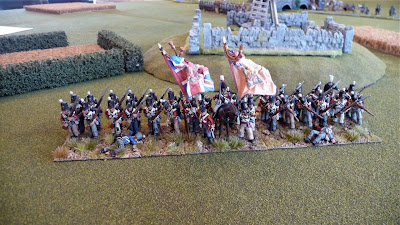 I want to build Colbrne's ill-fated brigade of four battalions which was over-run by Polish lancers and French hussars at the battle of Albuera (almost a 70% casualty rate). This first unit is the 2nd battalion of the 31st (The Huntingdonshires) which was the only battalion of the brigade that managed to form square before the cavalry hit. Twenty four of the figures were previously painted and based but I added a colour party, a mounted officer and some additional casualty figures to flesh it out - so 12 points here.

The next battalion is the 2nd battalion of the 48th (The Northamptonshires). This unit was mauled by lancers, rallied and then endured a protracted firefight with a French brigade. It lost over 400 men during the action. All these boys are new additions - so 35 points all told.

Next are the artillery. Royal Horse Artillery from the Perry twins. One base is a crew running up its 5.5 inch howitzer and the other is a 6 pounder being fired. I dunno what you count for artillery pieces but there are 8 crewmen in total. 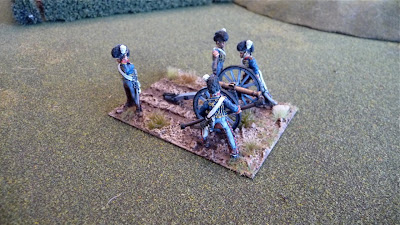 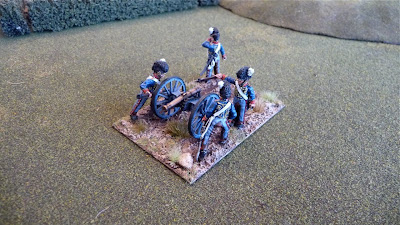 The French command stand depicts a Divisional general taking a report from a couple officers from his command. 6 points. 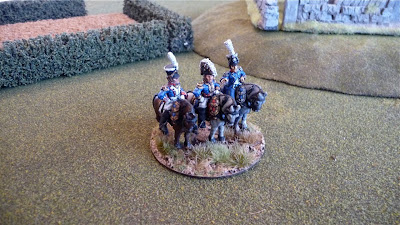 The British command stand is a Brigadier general chatting with an officer on foot. The mounted guy is from a month or so ago but the foot chappie is new. 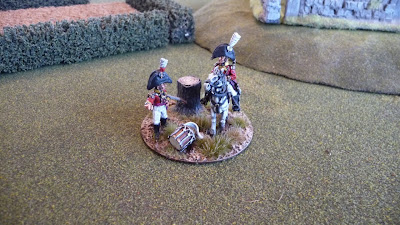 The last unit I prepared was a French battalion in greatcoats. I did these up as 3rd battalion conscripts fresh from the depot. They are pretty grotty looking, with some veterans seeded in the ranks to chivy them along to the front. I got a chunk of these off an eBay purchase and so I rebased them, inked them, touched up their highlights, did a bit of weathering and then added a fresh mounted commander and two sergeants and ten rankers to bulk them out a bit more.

I've done some completely mental painting binges in the past but I think this one takes the brass ring. I think this batch adds around 76 points to my tally (plus whatever for the guns). I'm completely knackered and will probably take a few days off from the painting desk...

Oh, and incidentally we did have our game yesterday afternoon which was a blast! I will post an after action in the next few days.
Posted by Curt at 12:08 AM

Dude - that is frigging awesome!

What a great job! Those battalions really look like mini 3D paintings from the Napoleonic Era. And thanks for hosting the Black Powder game. Never before has being slaughtered on a bridge been so much fun.

Outstanding!! Sylvain has some serious competition at the top of the league table!

Thanks for the kind words, guys! I know my stuff is a bit boring as its always focused on Napoleonics but I need to concentrate so to get enough completed to play a proper game. The French are almost at that comfort level. Next up will be fleshing out the Brits/Portuguese and perhaps do some Austrians to tack onto Greg's force. The great news is that I've convinced Sylvain to build the Russians! He's spoiled for choice what with the excellent new stuff from Victrix and the beautiful Perry castings from Foundry (and the Man is a painting machine!).