"At the end of this parade of Elves,
our enemies will find no "HoHoHo"
but "Woe, Woe, Woe"".
(Queen Ariel improvising a joke at the
annual Glade Guards Review without
consulting her speech writer.)

Now some people (nobody in particular in mind) may think that 120 archers might be too much. But consider this: statistically, it would take 162 shots to kill an average dragon with Toughness 6 and scaly skin 3+ at a range of 30 inches. Even with 120 archers, the Wood Elves can't kill a dragon in 1 turn! 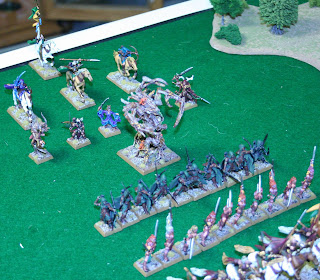 Here is a close up on the special and rare units as well as on the characters. When painting the Waywatchers, I made their face green, as if they would have dyed their skin, and their weapons black, as if they were blackened by fire smoke to prevent the steel from shining. Oddly enough, they ended up looking like mini Doctor Dooms.

Because this is my first 28mm army, I was eager to see how chain painted figurines would look like. From left to right: a single figurine I painted 10 months ago, a figurine I bought painted, my first Glade Guard and my last Glade Guard. I'm happy with the progress I made painting faces. I still find highlighting clothes challenging. Oh well, I'll just keep on practicing.

Great stuff, Sylvain! I have been avoiding rolling out with the cheez-bag Steam Tank but this arrow-storm army may 'force my hand'. (I think it is the only thing in my Empire force that will not be a pincushioned after enduring a couple turns of your shooting!)