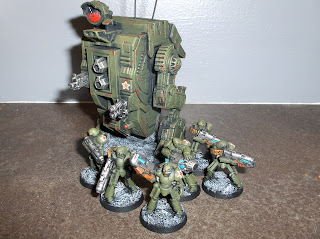 If nothing else, the Painting Challenge has concentrated me on finishing stuff that has been hanging around unpainted seemingly forever.  Two great examples are in this post. 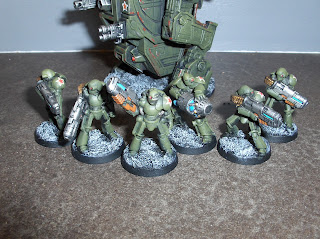 I picked up these models out of a bargain bin at Phoenix Games in Minneapolis, several years ago.  (Phoenix is now defunct and has been for some time if that gives any indication of how long they've been laying around).  I decided to paint them as "FuturKommandos" in advanced power armour suits, the pinnacle of technological advancement of the latest 50-Year Plan.  Five are armed with plasma rifles and one with a heavy plasma cannon.  For the tactical markings, I used some red star decals from Company "B" that were in my decal folder. 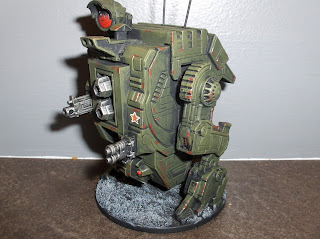 Behind the Kommandos stands another converted walker I have dubbed the "KomBot".  The base model is from WotC's Star Wars Miniatures game line (I have no idea what it's called) and I picked it up cheap a couple years ago at a local shop, thinking it might come in handy someday.  I reckoned that for about $3 it was a great deal.  Some GW weapons (and of course a standard-issue spotlight from Future Industrie GmbH﻿), a Futur-green paintjob with chips and rust, and it is ready for battle, with the addition of decals from Company "B" and GW. 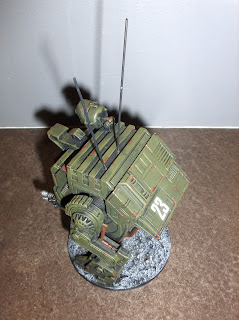 ﻿"Onward to the glorious future-socialist future -- FUTURKOM!!"
Posted by Dallas at 11:57 AM

THAT is a freakin' cool bit of kit. I love the trashcan design along with it being festooned with the assorted weapons, aerials, spotlights, etc.

Thanks man! And I know we also share an appreciation for a bargain ;-)