I've just finished a batch of cavalrymen for my Wood Elves Army. On the left are 10 Glade Riders, light cavalrymen with spears and long bows. In the center are 4 characters: 2 mounted wizards, 1 mounted battle standard and 1 mounted lord. On the right are 10 Wild Riders, supposedly "heavy" light cavalry, armed with spears and fury. I bought 3 battalion boxes for the Wood Elves and ended up with 24 riders. So instead of making them all into Glade Riders, I've painted them into different troop types. Besides, I found odd that the "official" Wild Riders, who are supposed to have a better armor save than the Glade Riders, are riding bare chest. So I've painted the armor as leather for the Glade Riders and as metal for the Wild Riders.

Here is the charge of the Wood Elf Light Cavalry. Since my last batch, I am making better bases, but I still need to work on contrast for the horses. The darker ones are OK, but the white ones need more depth. 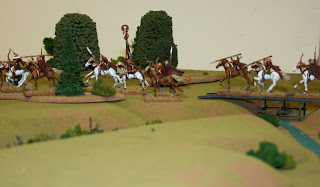 Wild Riders en route to intercept the vanguard of the Beastmen Hord of Kurtz the Unperfumed. I've used light cavalry in 2 games so far and they already have forged a reputation for dying spectacularly tragic and sudden death within the first 2 turns: they were fried by the ray of a Skaven Doomwheel in their first battle, then mowed down by an Empire "Gatling" (I forgot the official name) in the second one. 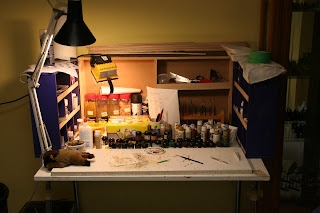 On a different subject, here is my painting station. For some reason, the picture turned out dark, but I can assure you that the room is brightly lit. One special feature is that the shelves are hinged. All the paint containers can fit in the sides and the two blue sections can be folded in. The idea is to be able to shut down the station when guests are sleeping in the room. The little stuffed buffalo is used to rest my elbow when I paint and my daughter keeps on stealing it from me.
Before I end this post, here is a link I would like to share with the conscripts.
It is a battle report from the blog of Kage, a friend in Regina with whom I played a game of FOW some time ago. The boards, scenery, Soviets and Fallschirmjägers are mine. The Stugs and barbed wires are his. The first picture is a vibrant example of the one thing that bugs me most about FOW: cramped deployment zones. All my units were literally in base contact. Anyway, it became a fun game after some of my units were killed, allowing for more dispersal.

That would be the Helblaster which turned your pretty cav unit to glue. To be clear, the Helblaster volley was the only bright spot in the Empire's tragic altercation with the Wood Elves. The remaining four turns were spent removing Empire models from massed arrow fire. Pointy eared freaks...