Elysians - a bit of heavy boltin'

Although I am still in Sylvain's dust (and Dallas' for that matter - WTF?) I am continuing to plug away and I managed to finish more Elysian heavy weapon teams. This time, three two-many heavy bolter crews. I hope these will come in handy when confronting the horde-like Hive Fleet Nostromo among others. 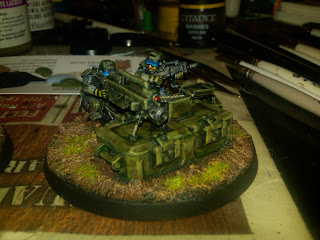 One of the sets - pictured above - is a very cool "set-up-on-the-drop-cannister" vignette. Looking at it now, I think I could have done more with this one, adding some markings to the crate, so I may go back and do that, but for now, they are ready to let rip on the enemies of the Imperium. 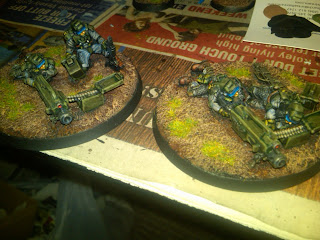 To keep up the Rogue-Trader theme in the main command squad, I have also added an RT-era medic, and equipped him with spare arms from the other Elysian packs. The benefit of the medic is dubious - a "feel no pain" attribute is hardly terrifying when it comes to the meagre close action abilities of an Imperial Guard command team - but it just seems right to have one hanging around. 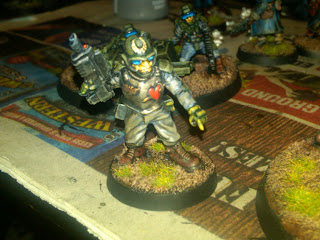 In terms of infantry, the Elysians are pretty close to completion....three full ten-man squads, one special weapon squad, two heavy weapon squads. I need to add a couple more figures to round out the command sections. I also have some snipers, and I think I want to get those done while the momentum is going - maybe I can get to those on the painting night this week!

But the hardest part is still to come - the Valks. Drop troops are lame without air support...
Posted by Greg B at 8:36 AM

Gorgeous figurines. I would like to see a "family picture" of everything Elysian you have so far.

Feel No Pain may be useful mostly to help keep the command squad alive from shooting attacks, so the officer can keep issuing orders.

Dave - that's a good point. At least the medic is pretty cheap in terms of upgrades.