Fresh from my late-summer Napoleonic's outburst, I have recently veered back toward completing some more figures from my ongoing Elysian project. Now that their Valkyries can land on an LED-lit platform, I just have to keep going. 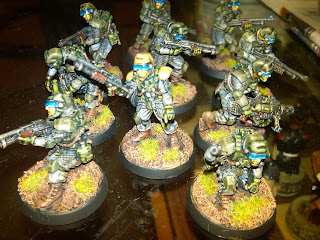 I finished a squad of 10 "hardened veterans" - essentially Elysian guardsmen with shotguns instead of lasguns. In keeping with the flavour of the current edition of 40k, I have two melta guns in the squad. These models were certainly fiddly to assemble - each has about 11 pieces - and all adhered to Forgeworld's ongoing quality level, which is middling at best and appalling when you consider the price. On the other hand, Forgeworld's quality-is-job-seven reputation was well known to me and I still ordered these figures, so I can't really be surprised about that.

I do find the shotguns look cool, but I did not enjoy soaking half of them in hot water to straighten them out. I was mostly successful, but one guy still has a bit of a bendy gun. Another barrel was knocked thanks to a poor cast, but I kept it anyway (still looked kind of sawed-off). My hope is that by keeping them in a group, the wonky ones won't stand out on the table. 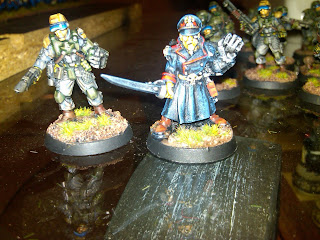 I also painted an "Elysian Senior Officer". I like the figure, and I like the Elysian take on a power fist...seems less comical, but still strong without looking silly or cartoonish. In fact, I can see the guy building a projector into it so he can give power point presentations to other Imperial Commanders ("As you can see Colonel, the synergies we could obtain by overwhelming this flank align well with our core values for this mission...").

Being the Imperial Guard, we needed a commissar too. The Elysian sculpts are lean figures, not as bulky as the current standard GW line. A lot of the current commissars look way too heavy next to the Elysians, so I went retro and dug a model (seen above on the right) out of my RT-era figure pile. I liked that he had a power fist too. That way there is some parity in case he has a serious "disagreement" with the officer. He also fits well with the RT-era officer I have painted for this collection.

I also need to figure out the army list. I can use them as actual Elysians, but that would require squeezing out another 40+ quid for a terrible Forgeworld book chock full of BS about Orks just to get the current Elysian army list. Or I can try and use them as regular guardsmen from the current Guard codex.

I'm not sure what the advantages are either way. I suspect the Elysian list will give them some benefits. For example, the Valkyries may be available as a basic transport choice instead of a fast-attack choice, sparing the need to organize the Valkyries into squadrons and avoiding the appalling squadron rules for vehicles from the current edition of 40k. On the other hand, I already have the guard codex, could just call all of the guys veterans, and see what happens.

And of course it's all academic until I can get the stuff painted...one thing at a time....
Posted by Greg B at 3:17 PM

Hi mate. What colours did you use for the fatigues?

Hi Chris - it's been quite a while since I painted these - and GW has switched their paint range since then. Here is my best recollection:

The grey fatigues were a base of Shadow Grey, highlighted with Codex Grey and then Fortress Grey. The armor plates were Dark Angels Green, highlighted by Catachan Green and the an Americana craft paint that was almost identical to Knarloc Green. The whole thing was them washed with Devlan Mud.