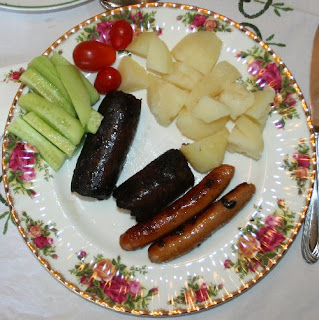 Mmmmh... Blood pudding... Such a refined delicacy that my mom took her expensive china out of the cabinet for the occasion. I went to Montréal for the long week-end and in addition to attending a wedding and visiting family, I found some time for wargaming. 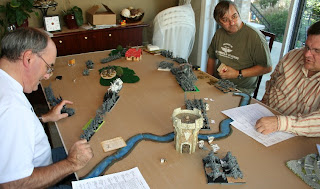 Before flying to Montréal, I rushed to finish assembling 2000pts of Wood Elves. Despite my best efforts, some Dryads were still headless when I left. I met some friends for a game of Warhammer on Saturday with 4000pts per side. I was allied with Marc (High Elves) against Christian (Skavens) and William (Chaos). Most of the units in the picture were glued in the last week. The Wood Elves had a good start: after the shooting phase of turn 1, the Skavens had lost most of their nasty shooters. I cheered for my Lord on turn 3 who singlehandedly destroyed a Doom Wheel with 4 arrow shots and one sword strike. But on turn 4, my left wing was beaten into blood pudding: I lost 20 Glade Guards, 5 Glade Riders, 1 level two wizard and 1 lord to... 2 rat ogres and 1 packmaster. I've discovered that the packmaster's whip is a pretty nasty weapon. Money to buy the codex of my opponents would be well spent. 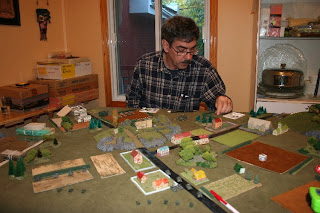 On Sunday, I visited with Robert, the guy who introduced me to miniature wargaming in the mid eighties. We used the Mein Panzer ruleset for a game of 6mm WW2. The objective for both the British and the German was to be the sole occupant of the castle on the hill, an ideal artillery spotting location. 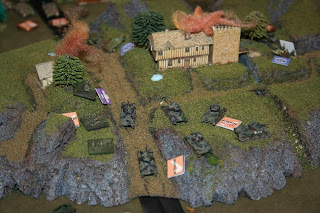 My company of Sherman and my company of armoured infantry in Universal carriers were hard pressured by a German motorised infantry company supported by some Panzer IVs. Eventually, the objective building collapsed under intensive shelling from the Shermans. The British then decided to call it a day, satisfied that nobody could use the building for observation.

I have to say that my own 2 Rat Ogre/Packmaster combination was spectacularly unsuccessful against Mike F.'s Knights... in fact, in the turn that the Skaven charged the Knights, they did not even score one hit, let alone any wounds. They died soon after that ;-)

What scale was the WWII game - looks like 6mm?

Yes, the WW2 game was 6mm. Robert has been collecting 6mm minis for decades and was able to convince André to paint some stuff for him. I also have some minis painted by André that I hope to display in a future game.