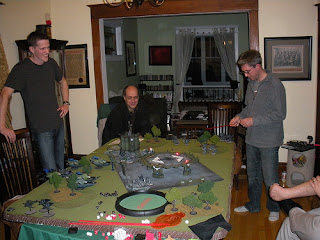 The game involved placement of one objective by each player, in his table quarter deployment zone, with victory to the player who controlled more objectives at the end of the game.  Nostromo's coach, Hive Mind, conceded afterwards that defeat was virtually assured with a poor initial deployment of his objective at his extreme table corner, farthest from the Eldar zone.  "What the ^%^&* was I thinking??" Hive Mind was quoted as saying later.  "That was a minor league move.  I knew that we were playing an extremely mobile team - Eldar skimmers can move 24" per turn - and my guys just don't have that kind of speed.  I should've placed the objective as close to the Eldar quarter as possible and just got my guys stuck in."

As it was, Nostromo faced a mostly empty playing field for the first quarter of the game as the Eldar stayed in the dressing room, declining to take the field.  "What the hell," said team captain Hive Tyrant later.  "I mean, here we are, ready to play, and there's no freakin' opponents on the field.  This is lame."  In sympathy with Nostromo, members of the crowd on hand were heard to chant "U-rin-al, U-rin-al", a not-so-subtle play on the name of the Eldar's team captain, Uriel.  Eldar Head Coach Dave V. was rightly unperturbed.  "Our team can come on the field whenever we want.  Besides, Hive Mind could've used that opportunity to reposition his team, absorb nutrients from the planet, or whatever."

But in the second quarter the Eldar team appeared and they did so with a vengeance.  Most were mounted in skimming vehicles and the storm of heavy weapons fire brought to bear against Nostromo was formidable.  "The genestealers really had a chance to come out and perform for us but unfortunately that didn't happen," Hive Mind said.  Genestealer player R'blraarrgh agreed.  "We infiltrated like motherf*ckers, but like Coach said, we didn't execute.  Something like 20 attacks against Fire Dragons - FIRE DRAGONS! - and we didn't hit once, not once.  Pathetic."

Coach Hive Mind said there was plenty of blame to go around in the loss.  "We plain got outplayed tonight," he said.  "We made some serious tactical errors, like leaving Carnifexes to guard our objective.  How stupid was that?? They're not even scoring units.  We ended up having to bring back some Warriors but even that wasn't enough as an Eldar skimmer got there to contest it.  We got no production whatsoever from Trygon, and the balloon-heads [Zoanthropes] just ended up being bounced around by a Warp Spider champion."
Still, Hive Mind looks forward to a future rematch against the Eldar and the next game in a couple weeks, scheduled against an Imperial Guard team.  "Now that we've played together a few times I think we'll be a much more powerful force to reckon with.  We're gonna be playing harder, and smarter.  Plus, we're more used to all these blinking LEDs on the field now.  Some of my guys nearly had seizures tonight, this was nuts."
Posted by Dallas at 9:45 AM

Team Nostromo should be fine in the long run as long as the Hive Tyrant isn't busy drunk dialing and sending text messages to the sideline reporters...

I got to play on the Eldar side. Which meant the game went GREAT for me. Don't think my Imperial Guardsmen will be able to pull the same "catch me if you can" strategy though...

The Guard at least has all those tank hulls, not to mention the sheer firepower.

As a 4th edition Codex, I find that the Eldar have to rely on the codex's very best stuff to try and stay in the 40K arms race.