Bring in the consultants

It's not exactly KPMG or IBM, but one new wrinkle in the Imperial Guard set-up is the introduction of "advisors", essentially figures that represent bonuses available to Imperial Guard players in 40k. As part of the new codex released last year, GW issued three new models to represent what are essentially bonus traits for an Imperial Command section. The figures are mail-order only, but I was able to acquire a pack of these from Dave V (thanks Dave!) a while ago and I finally got around to painting them on the weekend. 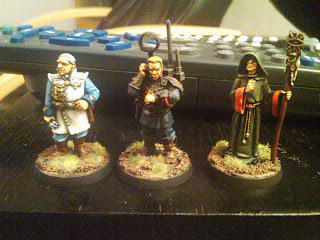 From left to right, the advisors represent an Imperial Fleet Officer, a Master of Ordnance, and an Astropath. The Fleet Officer puts a -1 on reserve rolls of your opponent (presumably they are too busy dodging orbital bombardment to arrive on time). The Astropath adds +1 to your reserve rolls ("Your platoon arrived just in time - like you read my mind"). The Ordnance chap has a more direct effect on the table, allowing the Guard player to drop a template every turn - it still deviates (double, I think) but hey - it's cheaper than a basilisk.

At first, I thought these were pretty trivial bonuses (with the possible exception of the Ordnance dude), but having played some 40k recently, I can see how they can impact a game. I hope to try these guys out this week against Hive Fleet Nostromo. If that Navy guy can keep the damn Trygon out of my lines for even one more turn, he will be worth it.

The models were a lot of fun to paint - I particularly like the fleet officer, holding his gloves in one hand like some kind of royal officer. The sculpt exudes an event horizon or aristocratic smugness that only navy officers can summon. One wonders what he screwed up back on the fleet to end up assigned as a liaison to ground-pounding Imperial Guard infantry...
Posted by Greg B at 9:32 AM

Nice paint jobs. I like how the officer of the fleet is older, looking peeved to be acting as liaison for a bunch of GROPOs.

I find that manipulation of reserves has a great impact on the game. That's why I always try to bring at least one Eldar Autarch, in order to negate the fleet officer's shenanigans.

An interesting build uses two Autarchs, to grant 0, +1 or +2(!) to Reserves rolls. One could reserve everything, then try and bring it all on in turn 2 on a 2+ roll.

>One could reserve everything, then try and bring it all on in turn 2 on a 2+ roll.