Croation Sensations ready for the table 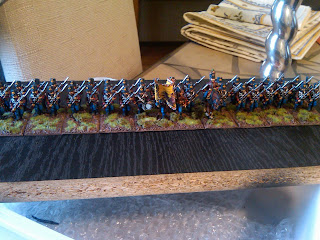 Well, I have been off for a couple of weeks on a wonderful trip to France. We got back on Saturday night (although it felt like Sunday afternoon) and thanks to the fog of jet lag, I was able to finish off the ground work and complete my Grenzer unit, part of the Napoleonic Challenge. 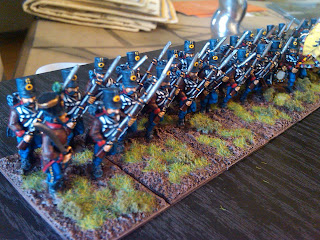 This unit is another big sucker - 38 foot troops and one mounted officer. The models are all Foundry castings. Foundry does not make command for Grenzer units beyond the chap in the bicorne hat, so I bodged by painting up some later period Hungarians in Shakos with Grenzer type colours. That provided a musician, standard carrier, an additional foot officer and a mounted officer. The Shakos of the Hungarian impostors look a little different, and I was guessing when painting some of the officers, but overall the uniforms are not that different and in the end I'm pleased with the effect. 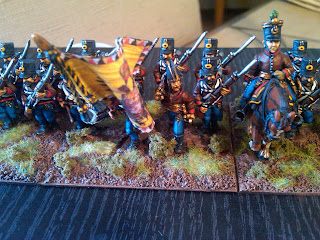 The "advance" pose, with the musket held to the front and the bayonets sticking off to the side, made basing this unit a little trickier than that stolid "march attack" poses of the Austrian line units I have painted. The Grenzers ended up a little more ragged, but not too much, and I think it still suits their character well.

Up next is some artillery. I'm going to paint two six-pounder guns with some crew. The challenge only calls for a single gun, but two guns will make it closer to a half-battery needed for some other rules, and I am thinking doing two guns can't be much more of a burden than one gun.

It will be a challenge as I see the f***ing clowns at Foundry did not include key components in the cannon pack - specifically the axles to hold the wheels on the gun carriages. So I'll have to improvise a bit there. But watch for more progress over the coming month.

It's too bad the painting challenge kicked in for October - since I started this project in July, I have painted 114 25mm foot castings as well as three mounted officers. Not too bad a rate of progress.

I will also be diverting a bit toward finishing off the infantry component for my 40k Elysians - there is a squad of guys with shotguns waiting to be painted, and I need to add a few more odds and ends like troops, advisors, a commissar etc. to round out command squads needed for an Imperial Guard force. I am also going to add some punch by painting up missile launcher teams. I don't know if I will add them to the squads, or keep them as a separate heavy weapon section of three teams, but I'll figure that out later. I will try and get these done for October, as well as the Austrian artillery. Should be fun.
Posted by Greg B at 9:22 AM

Welcome back! You just missed another epic zombie conflict that saw Cam's Chinese devoured to a man (although Dallas helped a bit as well). Highly entertaining!

Thank God the painting challenge only just started. Although, I'm sure you and Dallas will be top ranked soon enough.

Depends how many points a 40K Skyshield Landing Pad with LED lighting conversion is worth... ;-)

Painted figures from Cam!
We need pictures right away!
And Cam - how about a post crowing about the painted figs, after all of the flack we have thrown your way!

Ok, since I'm not back until later in October can I get a three week handicap on the Challenge? On second thought, forget it - I'll just paint twice as hard in November. (Sarah will be quite sick of me by then so I'll have lots of time to catch up.)

BTW, I hope you and Linda had a great time in France.

RE: Painting Challenge: I took delivery of some AA half tracks to add to the 22-tank Light Panzer Company.

Also, I have my eye on one of the new resin Eldar Hornet light tanks...