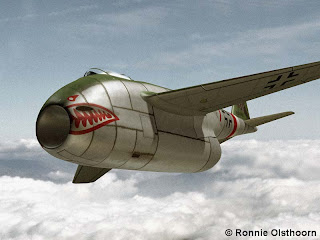 "Papagei flock, this is Papagei Eins. Climb behind me and call out when you spot Falke. Over."

Leutnant Heinz Sachsenberg turned his head in the cramped cockpit, his eyes scanning methodically for the aircraft code-named "Hawk". It was an experimental plane, a wunder-waffe, one of the new jet aircraft designed by the egg-heads and guaranteed to win the war. What hogwash, Sachsenberg thought to himself. I'll never trust anything without a propeller... in any case, if rumours were to be believed, the pilot of the Falke was at least as important as the plane itself, for it was being delivered from the factory to JV44 by Hannah Reitsch, one of the Reich's most accomplished test pilots and a favourite of the Führer.

Staffelkapitan Sachsenberg was jolted from his reverie by a crackle of static on his headphones. "Heino! There's Falke -- seven o'clock low -- and watch out for the Indianer up high!" Sachsenberg cranked his head nearly all the way around and spotted the Mustangs closing on his formation.