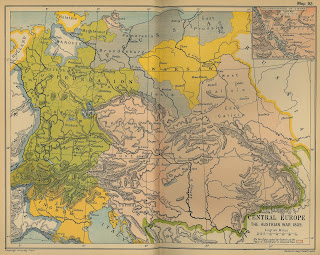 This Thursday we will return once again to Napoleonics! The scenario will be set in Bavaria, 1809. Archduke Charles has sent 140,000 troops into the Confederation of the Rhine, proving the war of the fifth coalition (Fifth? Must have been fun negotiations - "no, really, THIS time we'll get him!").

The Austrians have had a rough go of the weather, but are pushing the Bavarian troops back. Marshal Berthier, a gifted chief of staff for Napoleon, has performed poorly as an army commander for the French, and Napoleon is racing to the scene to take command himself. In the interim, Davout's III Corps has become isolated near Regensburg. The Austrians sense an opportunity to pounce and take out one of Napoleon's most experienced formations, potentially winning the war! 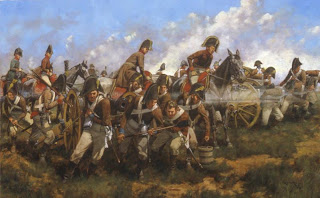 Austrian columns march to pin the French against the Danube. Prince Hohenzollern's III Korps encounters the lead elements of Davout's III Corps near the village of Teugen. Davout is on the move, trying to break through to the retreating Bavarians. The Prince looks to hold them back while he sends messengers to the Archduke, pleading for reinforcements. Will the Austrians hold? Will the ultra-cautious Charles even bother with reinforcements? And if he does, will they arrive in time?
Posted by Greg B at 1:50 PM