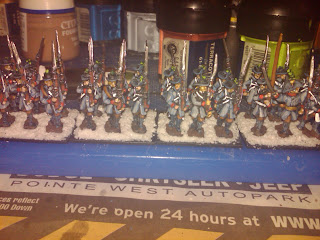 One of the fun things about collecting and painting the Austrians for the Napoleonic era is that by neglecting your collection, you are kind of acting in the character of the parsimonious Hapsburg family and their shoddy overall treatment of their otherwise stoic soldiers.

I have not added a unit (not even a STAND) to my Austrian 15mm force for 8 years - last figures I added were in 2002! Truly a gold-standard neglect of the Austrian army. And it's not like I didn't like the collection - I display them happily in the living room, complete with the nicks and dents they have acquired over years of use. Like that school paper from Grade 10, I just never got around to doing more work on them.

While rummaging through my pile of stuff in recent weeks, I encountered my pile of Austrian stuff. Much unpainted. And I was still out of the same stuff I that halted my progress back in 2002. But one bag was un-opened - Landwehr.

I painted these over the weekend, and based them up last night. Just need the goop to dry, and they'll be ready to get run over by Napoleon's finest.

So after 8 years, my Austrians have some reinforcements. A battalion of Landwehr! Not glamorous, but at least we're moving again. I hope to add some odds and sods, like finishing a unit of Cheveauxlegers, a couple of formations based as skirmishers, a horse-artillery base, and one or two more line units.

As for the Landwehr, I will need to add quite a few more units to make them actually a viable part of a given scenario. But I may use them as part of advance guard etc. for some 1809 games. While the figure packs come with standard bearers, I'm going to leave them without a flag for now. I'm not even sure if they had them - "Vienna Retired Armed Constabulary" or something like that?
Posted by Greg B at 9:36 AM

You, my friend, are a machine. Excellent work!!