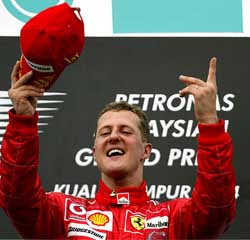 Last night the Conscripts assembled at Dallas' place, expecting a game of Napoleonics. However, it was not to be, because of some bad luck for me at the office - a meeting going until nearly 9pm (lame excuse, I know). Thankfully, Dallas deployed Formula De, the F-1 racing board game, and a good time ensued.

As Dallas raced by, Cam fired up and chased. Mike F had leave at that point, so I took over his car, pledging to drive as recklessly as needed in order to win. I lived up to the first part of that, shredding most of the new tires in the first turn out of pit row. But Dallas and Cam pulled ahead, neck and neck through the final lap. It was a great race, and we were all concerned to see Cam rolling hot. And I was shamelessly rooting for Dallas' car to fall apart...but turn after turn, Dallas held it together.

It went to the final dice roll, but Dallas beat Cam for first place. I was so sure Dallas' car would get wrecked, but it was not to be. Dallas repaid my taunting with a cheap little Schumacher victory dance, which he performed with eerie effectiveness (and rightfully so).

Bill and I contested for third place, but his car was pushed just a bit too far on the second last turn, and he ended up in the cheap seats. Dave finished fourth, and Brian's car was retired by his pit crew.

A great race! Sorry about the third place finish Mike...that will teach you to maintain your car.

My apologies again to all for the timing not working out. I definitely hope we can get the Shako game rescheduled.
[Final comment from Dallas: Cam... you learned many things at Interlagos. Mainly, you learned that the board can be wrong, and no amount of counting squares can replace pure driving skill and winning spirit. And that Toyota will never win a Grand Prix.] 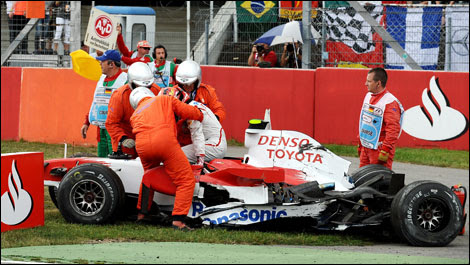 I knew what I was getting into by driving with Toyota - a glorious second place on the back of terrible pit strategy.

I knew there was a reason Dallas managed to hold it together. Damn Toyota...