Battle Report - Tied Up Outside Hamburg 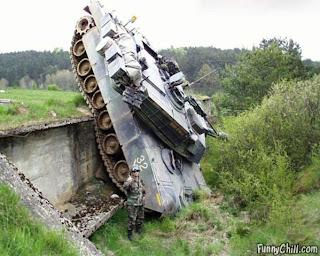 Another week, another fun game. The Conscripts rolled out for "Red Storm", the modern adaption of Dallas' excellent skirmish rules. The scenario was "Operation Airbus", set in a (thankfully) imaginary World War 3 setting of the summer of 1990. The game envisioned the Soviet spearheads approaching an Airbus research compound outside Hamburg, with a joint force of West German, British and French troops mounting a localized counter-attack to recapture some important Airbus technology which had been left behind by fleeing civilians. 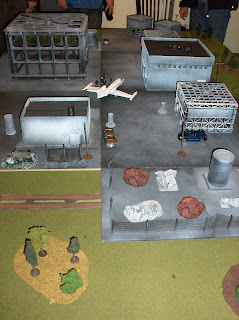 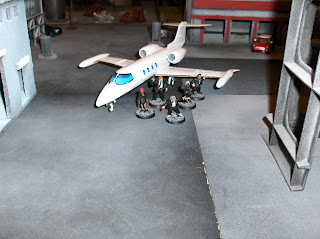 Learjet objective withe Euro-employees. Free access to automatic weapons guaranteed by the collective agreement
We used the monster 8'x5' table to represent the Airbus compound. Dallas placed a great mix of Euro-socialist green-space and urban/industrial buildings. The objective was a 1/48 scale model Lear jet. The game would be 8 turns long, and the sole winning condition was to capture the jet intact. This would be done by the side with the dismounted infantry unit which was closest to the jet at the end of the game.

The Russians had a motor-rifle platoon of three squads mounted in BMP-2s, a "Spandrel" BRDM vehicle with AT-5 missiles and a ZSU-23-4. In reserve they had a platoon of 3 T-80U tanks.

The NATO side had two German squads in Marder 1A1 IFVs, a Leopard IIA5, a German Lieutenant in a Mercedes (with a MILAN),one British squad in a Warrior IFV, a Challenger I, a French squad in a VAB, another VAB equipped with HOT-type AT missiles, and a Leclerc MBT. They also had one pass from a "Tor-NAH-do" ground attack jet.

The Russians, with the exception of the T-80s, would start on the table, and the NATO force would attack from either flank. For entertainment purposes, Airbus Industrie security personnel were placed next to their subsidized parked cars on the table. They would fire randomly (and inneffectively).

It was another awesome turnout. Dallas and Bill rolled with the West Germans, Brian took the British, Cam took the French (assisted by Mike B until he bailed to so see some kind of Miley Cyrus concert) and Dave O, Dave V, Mike F and Frederick took the Russian side.

The Russians dismounted their infantry and sought cover in the buildings and tried to prepare for an attack at any quarter. NATO rolled on with priority in the first turn, and would proceed to win priority in ALL eight turns (way to go Bill!).

Spotting was inconsistent early on, and most attention was focused on a Russian infantry Konkurs ATGW team which had set up in a commanding position on the roof of the building in the centre of the facility. They managed to take out the French VAB AT vehicle before succumbing to the wieght of fire from NATO.

The Russians replied where possible with the AT-5 missiles on their BMPs, but the Russian IFVs did not match up well against the 120mm main guns of the NATO tanks. Still, the
dismounted motor rifles stuck to their positions in the buildings, and resolved to battle on. 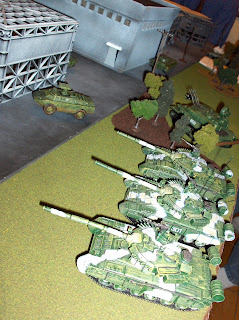 T-80s line up on the table edge
Dave O led the T-80s on to the table, and began dueling with Dallas' Leopard MBT. During the game the T-80s would land many rounds on the Leopard, but they did not damage it.

Meanwhile, Cam attempted to move into the Russian flanks, and he proceed to get his LeClerc stuck on a euro-trash sports car. Just another one for the file Cam...still, the tank did free itself
in time to have its main gun knocked out by one of the T-80s. 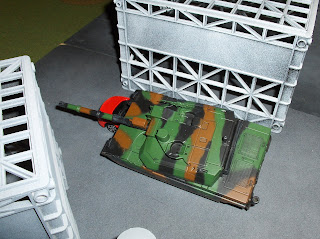 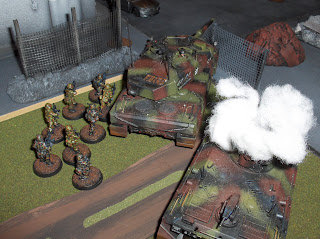 Lit up Marder and Bundeswehr infantry
As NATO swarmed the Russian position, the ZSU-23-4 was knocked out, setting the stage for the airstrike, which destroyed one T-80 and pinned many Russian units. Dallas lost most of one Bundeswehr squad courtesy of the 30mm cannon on Frederick's BMP-2. 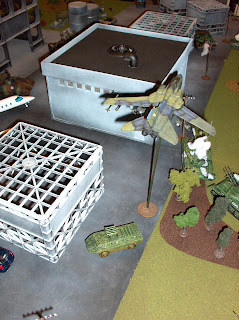 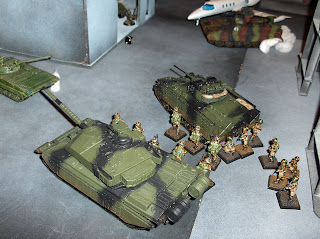 Challenger I and Warrior IFV
The final turn was a swirling melee in the middle. Bearing in mind the victory conditions, Bill was pushing a squad of West German dismounts right up to the LearJet. Dave V committed to do the same, machinegunning half of the West Germans while he was at it (and in turn losing an entire squad to the 20mm cannon from Bill's Marder 1A1). The Soviet officer in charge boldly raced out to capture the plane himself....

So when the dust settled at the end of the 8th turn, Bill had three surviving West German troops touching the plane, and Dave V had the Soviet Officer. I had not really anticipated this potential outcome - so we rolled for it! I gave Bill three dice, and one for Dave V - the highest single roll would win. Bill rolled a "3", "4" and a "6". Dave V had one chance - he rolled....a "6"!!!!

At that point, we decided it was a draw. The Russian Officer was named a Hero of the Soviet Union not long after the battle.

Thanks to everyone for a fun game, and thanks as always to Dallas for hosting. Great job Mike F on the French and British troops and models! They looked great (even as Cam got them stuck on sports cars).
Posted by Greg B at 1:04 PM

Thanks again for running a fun game.

It's was also very cool getting to play with and against all the modern vehicles and figs.