Inspired by the wave of weird war/sci-fi tank conversions, I decided to chop up a 1/48 tank kit that DaveV traded me. This tank will support some future Brits (perhaps Britz) that I'll be converting out of some cadians and british heads from West Wind's Secrets of the Third Reich. 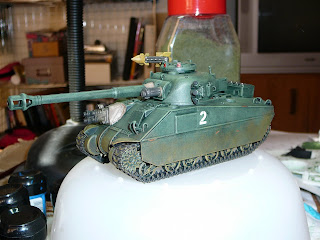 I was unable to find a gun to match the phallus GregB managed to mount on his Panther, but I think the British would assume this was big enough. It also has a vickers MG mounted beside the main gun. 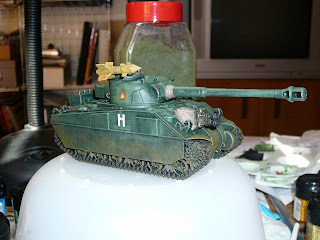 To compensate for the gun, I decided to add a super sagger type ATGW on the turret. For close support there is a flamethrower. I'm not sure how a MBT with a large main gun would find itself close enough to use a flame thrower, but that's the joy of science fiction...I mean science fantasy. 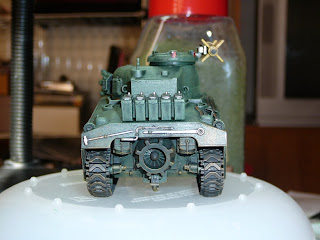 In keeping with Britain's green commitment, the tank is zero emission and operates a hydrogen fueled turbine engine. Those are the fuel cells on the top rear of the tank, so everyone better go easy on it.
Posted by MFraser at 11:24 AM

Glad to see this vehicle won't "hurt" the environment...maybe you should get some kind of Forest Stewardship Council decal for the engine...

Keep in mind that all the troops we'll be using are wearing gas masks. Zero emission vehicles may have been a good idea.

I was hoping perhaps you would mount a co-axial 2-pounder...to keep with the British tradition of appalling weaponry..

Mike that looks friggin' awesome. Bring it out tonight if you can...

If I make another vehicle, I'll give it a gatling 2 pounder gun system. That's just the secondary weapon system of course. Main armament will be quad 6 pounders.

Would that be the "Vulcan" 2-pounder....from "science fantasy"?