Escape from the Empire! 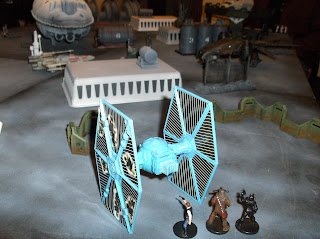 Last Thursday we played a multi-player Star Wars Miniatures Battles game with an interesting (I thought) premise - the origin of Han Solo. Nerds will know that Mr. Solo was formerly an officer in the Imperial Navy and was cashiered after attacking a fellow officer who was about to murder a Wookiee prisoner, Chewbacca. This started the whole "life debt" thing between Han and Chewie that continued until episode 6 or later. Anyway the scenario is Han's escape from Imperial custody - stealing a TIE fighter and escaping to join the Bounty Hunter's Union, or whatever. Above we see Our Heroes having disembarked from their TIE fighter (battle damaged!), accompanied by another defecting Imperial pilot, Phil. 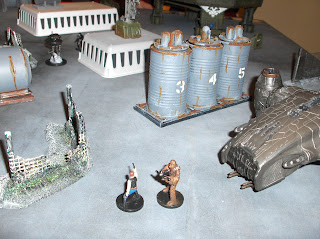 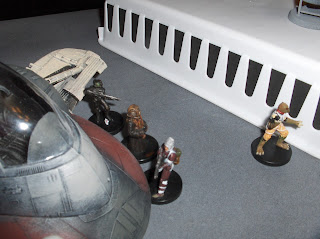 Some bounty hunters want to put Han and Chewie through a traditional hazing ritual, running agauntlet of blaster fire. 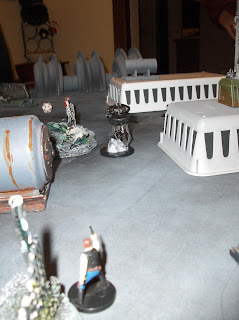 Imperials appear on the scene, bent on apprehending the fugitives. Han takes aim... 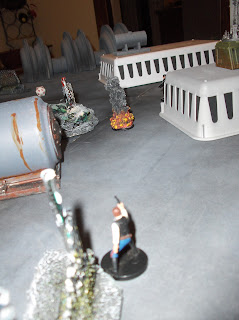 "I didn't hit it that hard - it must've had a self-destruct!" 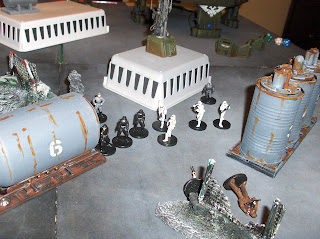 Chewie's down and the Imperials form a gunline. Han is headed for the Spice Mines for sure... 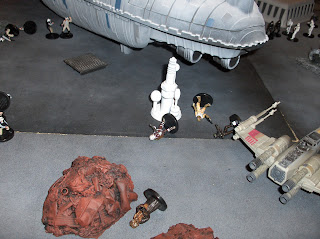 Even the bounty hunters were made short work of by the planetary militia. A brief game, but at least it looked good. I always enjoy rolling out the Star Wars toys.
Posted by Dallas at 8:36 PM

Cool game! Though I wonder how the fugitives managed to pack themselves into that (seafoam blue?) TIE fighter. Did Han and Chewie sit on Phil's lap?

I was SURE that 4-LOM would get better results...turns out his highlight of the night was taking down Phil.

Here's another vote for "two humans and a Wookiee in a one man snub fighter? IMPOSSIBRU!"

Anyway, t'was all in good fun, the militia were shooting on "stun", and mistook the escapees and bounty hunters for Red Team in an elaborate training exercise, so they all escaped later... even Phil. He now farms dewbacks on a ranch in the Outer Rim.

There may have been another TIE fighter or two off-table that transported Han/Chewie/Phil to the surface. Then again, what so odd about two or three "good buddies" cozying up together in a TIE fighter cockpit?

Great write up! I've done this same thing with the WOTC rules...using inches instead of squares. My question for you is what did you do for weapon ranges, that's one thing I never incorporated into my conversion?

I also didn't use points, I just built squads kinda based on the WEG SWMB game and Wookiepedia. Still, a good time as had by all! I'd be interested in knowing what conversions you made though.
Thanks,
Brian (zonk76 on TMP though I don't post much anymore)

Very good! I may have to revisit my home brew rules for WOTC and add in weapon ranges...