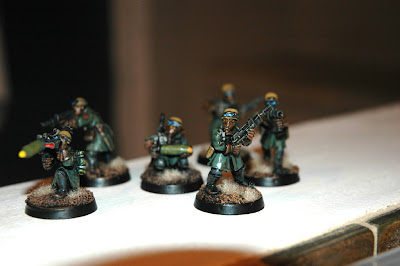 As you have seen on the blog, Dallas' sci-fi commie project has taken on some outstanding momentum. We just need someone for those Space Commies to mix it up with. It just so happens that my junk heap full of pending/stored GW crud has a pile of Steel Legion troopers in it. I've had these jokers for years. Every so often, I would try to paint one, thinking I could whip together something that would represent a sci-fi version of the German Fallschirmjager - the test mini would suck, and I would forget about it and move on.

Well, this time, I think I have found a scheme that I like. To match Dallas' theme of "sci-fi-ing" vehicles, and to have a thematic counter-match to the Russian look, I will attempt to build a force of sci-fi panzer troops...who knows which faction they will be from? Perhaps those Corporate Goons Frederick mentioned at the game last week?

For vehicles, to go with the German theme, I will dip into a stash of Corgi models of German WW2 vehicles I accumulated back when I had some delusions of doing WW2 in 28mm (I would still like to do that sometime, but Dallas has it so thoroughly covered the effort would be kind of redundant). I've put in for some more tank sprues for conversion work.

So the intent is for it to be some sort of science fiction Panzer Troop...Panthers with co-axial autocannons and other GW abominations, and some kind of converted 251C "uhu" (intended for WW2 nightfighting) to serve as a targeter for the armour, and maybe a converted Marder III and Flakpanzer of some kind. If I can scare up enough 1/48 scale half tracks, I will convert those to be the APCs.

Watch this space for progress on "Project Opfor"! Watch out, Space Commies...
Posted by Greg B at 8:04 PM