Wrapping up the Painting Challenge 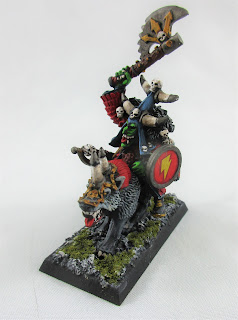 The Painting Challenge has been over for nearly a month now and I'm trying to get back into the brush-swinging habit - this should be made somewhat easier by the return of winter to the Prairies but I'm having to work at it... anyway I thought I'd try to get myself back into the spirit by posting some of my last Challenge models here as well. Away we go...

Having completed the Chambers of Challenge and offered tribute at the Altar of the Snowlord, all that remains is to post the last few models completed before the end of the Challenge. First up is this Hobgoblin Chieftain on Dire Wolf, from Games Workshop's old Warhammer Fantasy Battles range. 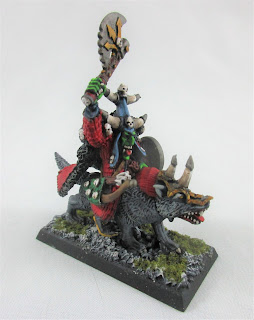 The first army I ever painted for WHFB was a classic "big hat" Chaos Dwarf force, which still maintains pride of place in my cabinets. An important part of the army was a large contingent of Hobgoblin Wolf Riders, which engaged in some "creative reimagining" of battle reports we posted on our blog. 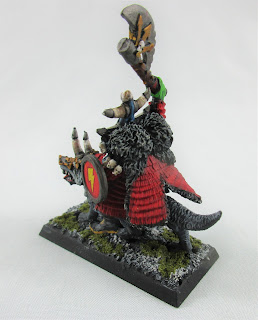 In sniffing around for something to paint at the last minute, I noticed that I had this model that had been waiting for paint for nigh-on 15 years or more. So I got at it! 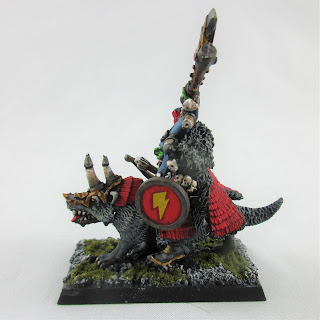 Makes me want to get the Chaos Dwarfs out again for some old-school WHFB! Barks - take note - I counted 15 SKULLS on this model alone! Must be some kinda record...? 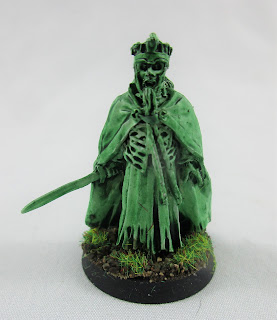 Next up is the King of the Dead to accompany my recently-painted Warriors of the Dead. The King is a metal model which arrived yesterday from an eBay transaction. It was new in the blister, having originally accompanied an issue of the Eaglemoss "LotR" collector's magazine. 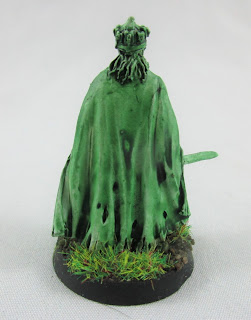 As before - simplicity itself to paint. White spray and Biel-Tan Green wash. That's it! 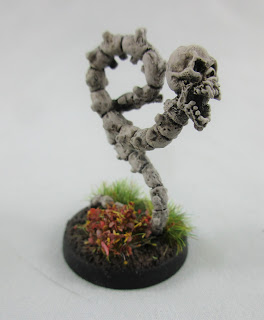 Lastly, another postal arrival from yesterday - a very cool "Death Worm" from Otherworld Miniatures (currently on sale at their site for 4 quid!!) 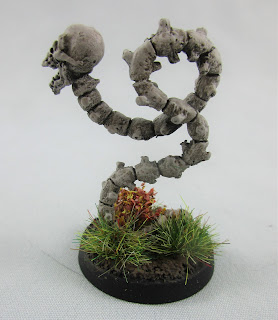 This monster is a sorcerous construct and not, strictly speaking, undead - at least according to its entry in the Fiend Folio under "Necrophidius". Conscript Brian H. instantly recognized it when I showed it off on our Zoom call last night and directed me to the FF entry. Good knowledge Brian! 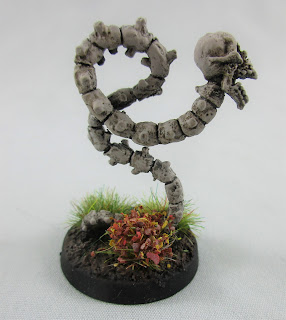 It was obviously another super-easy model to paint and brings the total skull-count for this post to 16 SKULLS. WOW!

I also posted a wrap-up of my Challenge models on the Challenge blog:

Well, here we are at the end of the Challenge. I'd set myself a modest goal of 500 points which I ended up more than doubling. Still, it wasn't *quite* enough to get me into the top 25 - my good friend Greg pipped me by a mere 6 points! In any event, here's the breakdown of my Challenge production:

I just want to end this post by again thanking Mr. Curt and all of his Minions for running the Challenge for all of us, and also to Lady Sarah and the Minions' other halves for their forbearance and tolerance of the time Curt and the Minions spend on it. Thanks also to my fellow Challengers for the kind words you posted about my work.

So that's it... I promise I'm going to try to get some models painted... I have an idea what I'm going to do (and I've even finished the conversions and gotten them primed) and I promise you it will be like nothing you've ever seen on the blog...!

Great work in the Painting Challenge Dallas! You really tore up the "Chambers of the Challenge" in particular, very nicely done.

A great effort all round Dallas!

Some great stuff there, Dallas. Very eclectic, and nice work getting through the Chambers of the Challenge. I hope to join you in the next Painting Challenge.

Great work Dallas! You had a great Challenge this year.