Unlike the majority of my recent Lord of the Rings projects that were secondhand minis bought off of eBay and refurbished, this one involved all new figures. The 'Damrod' figure was purchased new, but I had already based and primed years ago. The rest were from an unopened box of Games Workshop plastic Rangers of Middle Earth, and three blisters of now out of production metal figures that were marketed as 'Faramir's Rangers'.
The plastic figures were fairly clean with only a few having flash or mold lines that needed to be filed off. The box comes with a total of 24 rangers divided into 8 firing bows, 8 wielding swords, and 8 carrying spears, although those not firing bows have a bow slung across their backs. The nine metal figures were fairly equally divided into the four sculpts that were done back in the day, two standing and two kneeling, with each of those either wearing a hood and mask, or not. The plastic figures required minimal assembly. One pose comes with a spear and hand as a separated piece, but the rest have no separate parts. All were glued to their bases using either plastic model glue or epoxy as appropriate. Then a layer of fine sand was glued to the bases with PVA. Once everything was dry, all the figures were primed matte black using a rattle can.
Looking at stills from the movies for inspiration, I found the colours worn by the Ithilien Rangers had considerable variety, but consisted mostly of dark greys, greens, and browns. Rather than trying to make things completely random, I decided on four different colour schemes, but mixed up the poses so that no two figures that had the same pose were painted exactly the same. The only unique figure was Damrod, which I painted using the images from the Games Workshop website as a guide.
All were painted using water-based acrylics, mostly Vallejo, followed by a coat of Army Painter Strong Tone Quick Shade. Once the Quick Shade was dry, I painted the sand on the base dark brown, dry brushed with a lighter shade of brown, and then added the flocking, shrubs, and tufts of grass. The last step was to spray them with Rust-Oleum flat clear to take off the shine left by the coat of Quick Shade. Here is the final result. 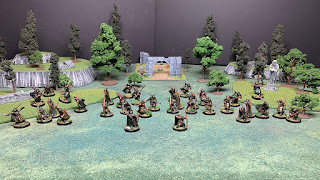 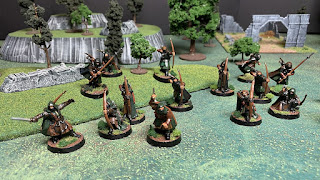 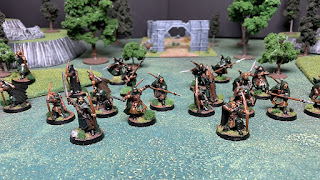 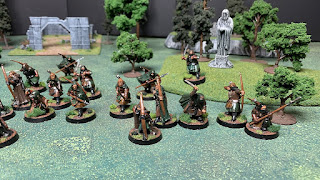 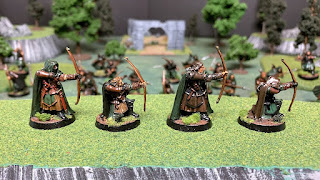 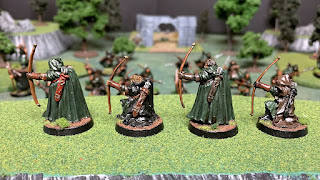 Having spent many years fighting Sauron's minions alongside Faramir with the wilds of Ithilien, Damrod is an experienced Ranger in his own right. As Sauron's armies advance, Damrod takes up his sword and bow in defence of Gondor as the forces of Mordor invade the ruined city of Osgiliath, in a futile attempt to drive them back. 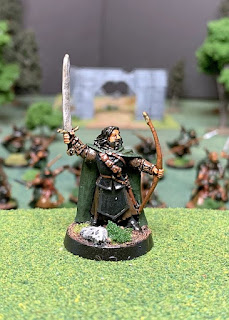 I am currently on the hunt of minis of Madril, and Faramir as a ranger, to added some more Ranger heroes/captains to the force. Most of the online webstores don't seem to have them in stock anymore, despite them still being listed on the GW website.

Thanks for reading. Stay safe and healthy.

I like the variety in all the greens and browns! I've got these in my painting queue- I found a metal Faramir and Damrod, but no other metal figures.