The next addition to my Ossiarch Bonereapers is the Gothizzar Harvester. All those bone constructs need raw materials and one of the best sources after defenseless towns and hamlets is the battlefield! The model can be equipped with either sickles or bludgeons. I went with bludgeons because I think they look more dangerous. The spirit skulls seemed a bit easier to paint on this one, though I still painted many of the parts separately. Assembly was easy and I didn't have any issues. I also added some metal washers to the underside of the base to give it some heft! 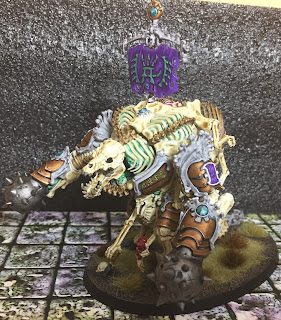 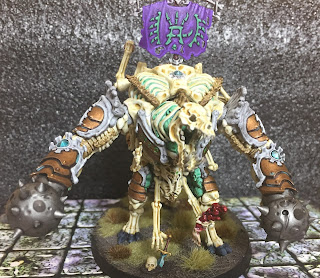 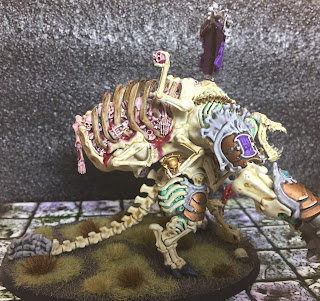 The idea of the harvesters is to scour the battlefield for spare parts, which it places in a large basket on its back. All manner of bones are in there in very gory detail. I used a mix of washes and layer paints to make the bones appear "fresh" as though they haven't been cleaned yet. The kit provides a few alternate arm positions as well as carrion birds fighting the arms over some scraps. The birds were very fiddly and I ultimately opted to not leave them off as I'm certain they would snap off during play and/or transport. 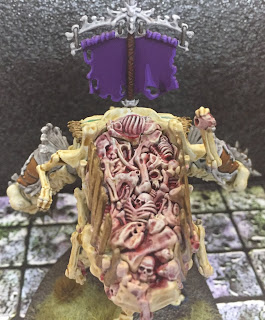 I have a unit of cavalry to finish next and then I think I'll take a break from the Bonereapers and move on to another project.

Great job on these guys Mike! Hmmm...maybe I'll have to purchase some Age of Sigmar models after all? If so, we can blame you!

This monster in particular is grimly entertaining...well done.

Makes the prospect of being made into a "Servitor" in the 41st Millennium seem positively appealing by comparison...!