Every army needs a leader and for the Ossiarch Bonereapers I painted up one of the named characters: Arch-Kavalos Zandtos! 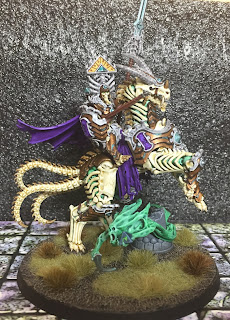 I got this for my birthday last year from my wife. The box allows you to build either the named character or the generic leader. I liked the look of the one above despite it being the less stable of the two builds. There's not much supporting this model and I can see that transporting it would be a challenge, but the looks cool factor once again won out. 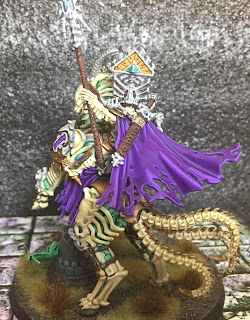 The model was a actually a bit of a challenge to paint. The design theme for the army includes these spirit sculls that make up the "guts" of the models. These are then surrounded by pieces of bone to make a construct. The model really maximizes this by having the bone pieces attach over top of the skulls. The only way to paint the skulls was to paint all the pieces separately and then assemble it when the painting was far enough along. This then made assembly a real pain. 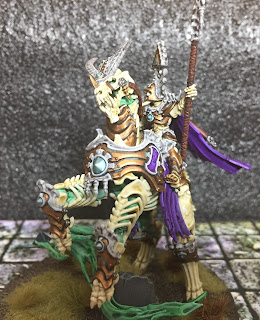 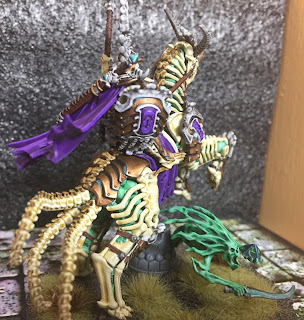 I'm not sure this inner skull design feature is really worth it in the end. most of the skulls get covered up by the rest of the model and it seem like a lot of work for little pay off. A similar effect could have probably been accomplished if the model was designed with fewer components. This just seemed to be needlessly complicated. Someone just starting out in the hobby would have been lost on this model and making the mistake of assembling first, then painting would have probably seen this model hurled across the room!

I'm trying to churn this army out quickly, so I'm using contrast paints for the bone. This has been faster compared to how I would normally paint them and the bonereapers lend themselves well to contrast paints.

I can see how that would have been a pain, but the end-product is worth it, looks great Mike. Which contrast paint do you use for the bone?

It’s mostly skeleton horde, but I also used Wyldwood and a grey one for some of the detail.