With this project I was again back to a collection of secondhand plastic figures purchased off of eBay, along with some new metal character figures, as well as some metal goblin warriors and archers that are long out of production. In total I had 12 goblins with sword and shield, 12 goblins with bow, 12 goblins with spear, 3 goblin captains, a goblin shaman, a goblin drum with two drummers, and Durbûrz, Goblin King of Moria.
All the plastic minis were in good shape, so no repairs needed to be done. After cleaning up any mold lines, the metal minis were glued to their bases using epoxy. Then a few 'boulders' (actually small pebbles) were glued  to some of the bases using epoxy again, followed by a layer of fine sand that was glued to the bases with PVA. Once everything was dry, all the figures were primed matte black using a rattle can.
All the 'rank and file' goblins were painted in an assembly line fashion starting with the skin colour, and working outward from there. The character figures got a similar treatment, but I also painted on yellow eyes with a black slit pupil, as well as any special colours such as the skulls on the shaman, or the bone 'drumsticks' on the goblin drummers. Water based acrylics were used throughout, mostly Vallejo paints. Once completed, everything got a coat of Army Painter Strong Tone Quick Shade, which has become my 'go to' medium for mass armies. When the Quick Shade was thoroughly dry, I painted the bases starting with dark brown, followed by dry brushing on a lighter shade of brown. The 'rocks' were then painted with a medium grey. Finally some small patches of flocking were added in a random pattern to all bases to match the ground work on some goblins that I had done in the past. Here is the final result. 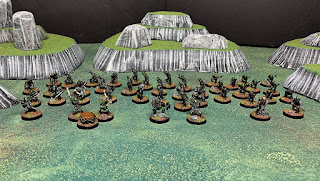 Beneath the peaks of The Misty Mountains lie many Goblin kingdoms. The greatest of these is undoubtedly that of the former Dwarf stronghold of Moria, ruled over by the tyrannical Durbûrz. The largest and most brutal Goblin in Moria, Durbûrz has risen up the ranks before becoming king, and any who have dared to challenge his rule have been swiftly and callously dispatched. Durbûrz rules Moria with an iron fist and instills great fear in those who follow him. [below left]
Quite where the Moria Goblin Shamans received their knowledge of dark magics is unknown, although it is likely they learned it in the dark corners of the mountains away from prying eyes. Possessing a crude and brutish form of magic, these shamans are capable of whipping their followers into a bloodthirsty frenzy, enabling them to suffer grievous wounds yet still carry on the fight. [below right] 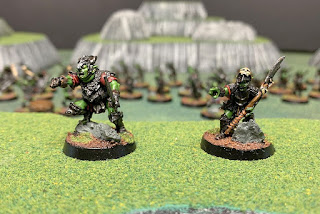 The sound of Goblin Drums heralds only doom and death to those unfortunate to hear it. To the monotonous beat of the crudely fashioned drums the Moria Goblins scurry into battle, driven forth by the constant rhythm. Whilst the sound of bone upon taut skin spurs the vile Goblins forward, the deathly sound strikes fear into the hearts of all of those that know the peril that they now face. 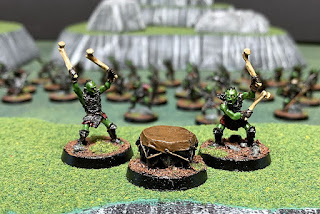 Whether it was through a vicious cunning or just out of brutality, Goblin Captains are those that have risen through the ranks to lead Goblin warbands. Although they lack the martial prowess of other races, these Goblin Captains ae not to be taken lightly, and they are certainly fierce enough to give even skilled warriors pause for thought - if only for a moment. (The figure on the right with the spear is actually one of the metal Moria Armoured Goblin Warriors that are now out of production. I had an extra goblin spearman, and I needed another goblin captain, so he got a promotion.) 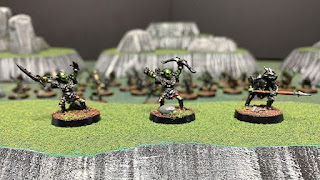 Here are the rest of the four metal Moria Armoured Goblin Warriors that went out of production when Games Workshop introduced their box of plastic Moria Goblins. 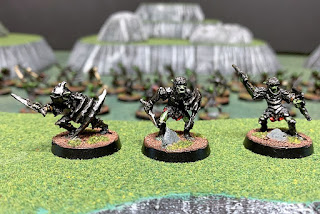 I also had four metal Moria Armoured Goblin Bowmen that are also out of production. Along with the metal Goblin Warriors, they add some nice variety to the swarm of small, mean-spirited creatures that live a troglodyte existence in the numerous delvings beneath the Misty Mountains. 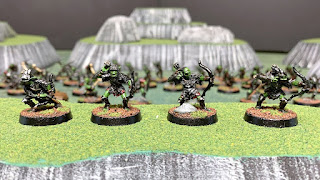 That completes all my Moria Goblins that were in my 'In' Basket, although I still have two cave trolls to paint, one metal and one plastic. With the re-conquest of Moria campaign that I am working on, I may also have to get myself a Balrog.
Thanks for reading. Stay safe and healthy.

Great finish to an interesting project.