Age of Sigmar has not caught on with the Conscripts. The psychological trauma inflicted on the other members by the destruction of the Old World is incredibly raw and it may take decades of psycho-therapy to overcome. Rumors of a return of the Old World have not helped and may have postponed true healing indefinitely. In fairness, I was fairly late to Warhammer Fantasy Battles and only got into it during 7th edition. I also had the misfortune of playing Bretonnians, which meant I only knew failure on the battlefield. The army was also never again given an update in future editions and contributed to what was a truly lackluster gaming experience. Don't get me wrong, the destruction of the old world was shocking and I found the first edition of AoS less than inspiring. However, things have progressed a bit and the model line has some of the best minis I've ever seen (and some truly bizarre ones like flying sharks!). They also gave up on the 4 page rules skirmish game idea and are going for large scale battles (although still less complex than Fantasy). I've thought about collecting an AoS army for a while, but wasn't sure which one to start. When GW released the Ossiarch Bonereapers, I knew I wanted to collect them. I love the idea of undead constructs imbued with souls of long dead warriors and the notion of them forgoing the destruction of a mortal settlement in order to extort the populace out of their very bones, is entertaining.

For my birthday and Christmas last year, my wife and daughter got me an assortment of models from the bonereaper line. I wasn't able to assemble them in time for the challenge, but with that over I've finally been able to get a few units assembled and painted. First up are a unit of Mortek Guard. These are the front line troops and make up the bulk of the army. This group of 20 is armed with swords, but they also have the option to be armed with spears. I painted the bone using GW's contrast paints and I'm pretty happy with the results. For their armour, I went with a bronze age colour scheme to make them appear ancient and from another era. The spirits imbued within are a collection of warriors from across time, blended together to make the ultimate soldier. 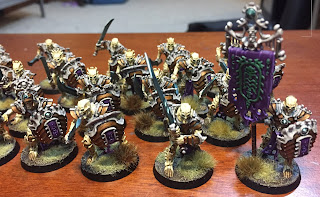 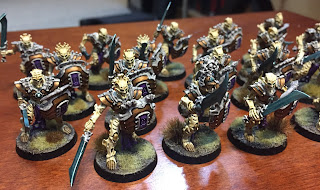 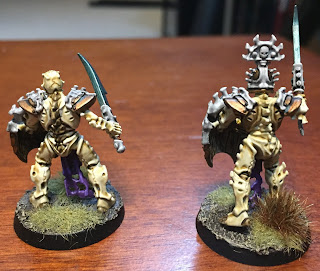 The army relies on it's named characters for powerful magic, but they do have a few basic mage units to help buff the army. The first of these I painted is the Soulmason. He rides around in a giant walking chair! In the fluff, all the constructs have souls, including the chair! Failure in battle is rewarded with being transferred into the body of a lesser construct, such as a mount, walking chair or maybe even a bidet! Anything you can build out of bone I guess. 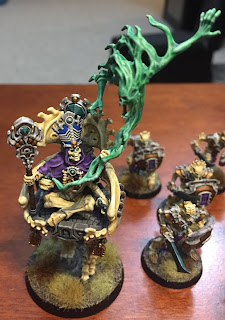 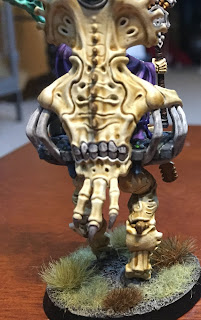 Progress to going well with these guys and I'm hoping to complete a few more units this month. Perhaps some day in 2022 I can put on a game of AoS with these guys for the group. GW even makes AoS rules for Bretonnia, allowing them to get demolished in another fantasy game setting!

So bony! Great looking models, even if they ARE on round bases :-D

Yeah, I won’t be rebasing the Bretonnians!