Elven Heroes of Rivendell and Lothlórien

I am continuing to whittle down my Lord of the Rings 'pile of shame'. All of these figures were based and primed years ago, and then languished on the work bench. I haven't done any elves so far in this current painting spell, so I thought some elven heroes should be next. The six I completed are Gil-galad, Elrond, Elladan, Elrohir, Haldir, and a Galadhrim standard bearer. All of these are Games Workshop casting from at least ten year ago, and most have been replaced with new sculpts. 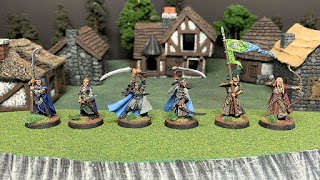 All of these were painted using water-based acrylics, mostly Vallejo, plus some ink washes of dark brown and reddish brown. The elven armour was initially painted with bronze and then highlighted with gold. In the case of Haldir and the standard bearer, their armour was given a wash of reddish brown prior to the gold. That was followed with further highlighting with a silver-gold mix. Otherwise the method for painting was to lay on a dark colour first, and building up ever lighter layers on the raised areas.
Gil-galad and Elrond
Gil-galad was the high king of the Elves and the mightiest warrior of his Age, his bravery and leadership inspiring his followers to carry out great deeds in battle. At the height of the War of the Last Alliance, Gil-galad confronted Sauron, throwing himself into combat with the Dark Lord for the freedom of Middle-earth. Though Gil-galad would never see the Dark Lord finally defeated, for he perished at the hands of Sauron upon the slopes of Orodruin, his name lived on in songs and legends - even those sung by Sam during the closing of the Third Age.
A mighty and renowned warrior, Elrond has been at the forefront of many great battles. He fought against Sauron in the War of the Last Alliance and bore witness to the Dark Lord's downfall. It was he who tried to convince Isildur to destroy the Ring for good, an act that would have saved much suffering in the Third Age. Blessed with the gift of foresight, Elrond is able to provide great wisdom for his allies. 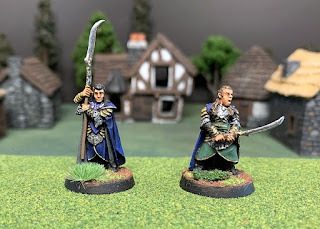 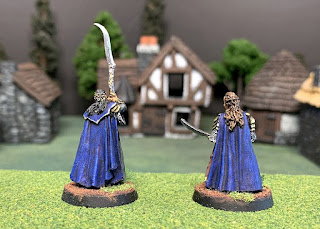 Elladan and Elrohir
The twin sons of Elrond and Celebrian, Elladan and Elrohir are every bit as skilled in combat as their father. The twins often rode alongside Aragorn in his youth, forging a strong bond with the future king through their battles with the Haradrim and the Orcs. Whilst most Elves played little part in the War of the Ring, Elladan and Elrohir joined Aragorn as he ventured into the paths of the Dead and even followed him to the Pelennor and the Black Gate. Together, the brothers are a deadly foe, fighting with a whirl of flashing steel and the precision of the Elven lords of old. 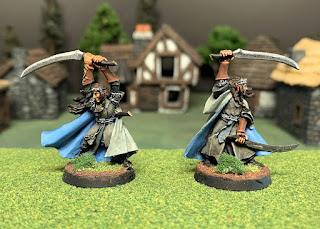 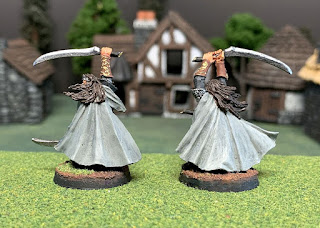 Haldir and Galadhrim Standard Bearer
One of the most trusted captains and skilled archers of Lothlórien, Haldir is tasked with defending the woodland borders. It was Haldir that led the Galadhrim to Helm's Deep to honour the alliance that once stood between Men and Elves, a noble act, but one that would ultimately claim his life. His sacrifice was not in vain however, as the forces that were brought to the Hornburg no doubt provided incalculable aid in the defense of the great fortress.
The Golden Wood is defended first and foremost by the warriors of the Galadhrim, steadfast soldiers who have honed their skills in combat across many wars throughout the ages. Like all Elves, the Galadhrim are skilled with blade, spear and bow. Tasked with the protection of Lothlórien, these warriors shall give their lives in its defence, for should it fall, Middle-earth shall surely follow. The combat bonus of the banner allows the player to re-roll one of the dice rolled to determine who wins the fight. 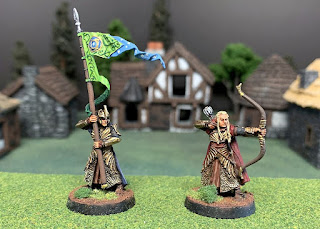 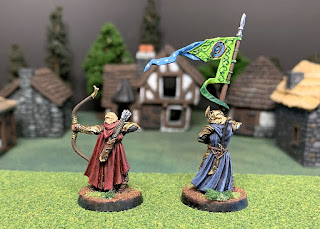 While I already have some High Elves painted, Haldir and the standard bearer are the first Galadhrim figures I have painted. I liked the paint scheme used for these figures on the Games Workshop website, and tried my best to replicate it. I am pretty happy with the results. I have some unopened blisters of older metal Galadhrim warriors in my 'pile of shame', but I think it's time to do some companies of Mordor Orcs next.
Thanks for reading.

Very nice work here Frederick! You're really sticking with whittling down that pile!