Artoo and his robosexual buddy Threepio have appeared in all 9 main Star Wars movies, and in Rogue One. By the end of the last film, Artoo is probably the character with the most complete view of what happened in the Galaxy (at some point Threepio got his mind wiped). This ties into an early idea George Lucas had where the framing device of the films would be R2-D2 recounting the story in the distant future.

In some of my previous posts on this project, I described painting Luke and Leia, Han, and Chewie. This pair of droids presented some new challenges, since they were both basically chunks of metal, and I am most comfortable painting flesh tones and clothing. It helped that these models are inject moulded hard plastic, not the soft plastic my earlier figures are made out of. I find that hard plastic is much easier to clean up and assemble. 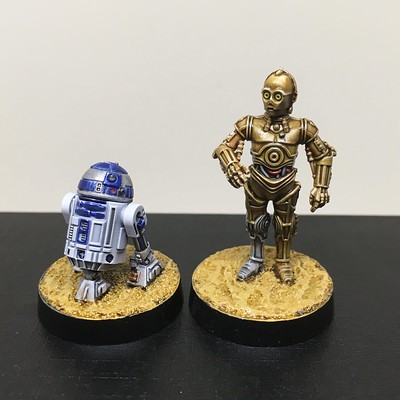 I airbrushed zenithal highlights on both, used some Tamiya aluminum spray for R2’s head, then proceeded with my usual use of various Citadel Shades, Vallejo and other acrylics, and some artists’ oils for final highlights, shadows, and blending. 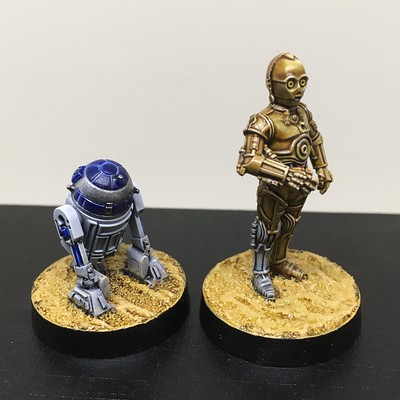 Spraying aluminum on Artoo's head allowed me to render the thin metal lines on the top of his head; I just had to paint the blue panels. I shaded the back of his head with a thin glaze of Abteilung Smoke oil paint. All Artoo's blues, including the details on the front of his torso, were done with P3 Exile Blue, then some Winsor & Newton Winsor Blue and Titanium White oil paints, for depth and point highlights.

I toyed with the idea of painting Threepio with true metallics (I have both gold ink and some brass powder in my tool box). However, I went again with zentihal highlighting, with the source light above and in front of his left eye. Multiple glazes of GW Seraphim Sepia, and a couple of glazes of Reikland Fleshade and Agrax Earthshade got the basic contours. Some mixes of Titanium White, Gold Ochre, and Burnt Sienna punched up highlights (especially on the left top of his head and across his chest) and shadows, and I used some pure white for point and edge highlights. I picked out details of his eyes and the wires on his torso with oil paints. 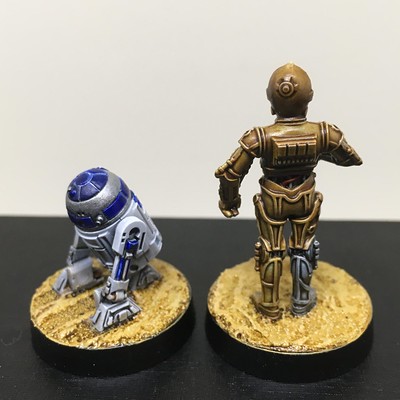 Threepio's right calf is sculpted differently from his left. This puts the sculpting within a certain  in time period in the movies, so I painted his lower right leg as it is seen in Star Wars (Episode IV: A New Hope), in a more "silvery" metal than the rest of him. So, over the grey scale under-painting I used GW Nuln Oil glazes, with some contouring with Abteilung Smoke and Senelier Peach Black oils.

For the groundwork I used fine garnet gel acrylic medium. For Artoo, I got a small rectangular piece of brass, and used it to sculpt the straight tracks in the sand behind him. Artoo also got some light weathering with various oils. 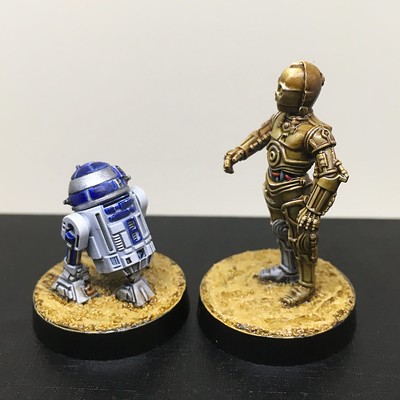 I have now completed the main 6 Rebel characters from the Original Trilogy. 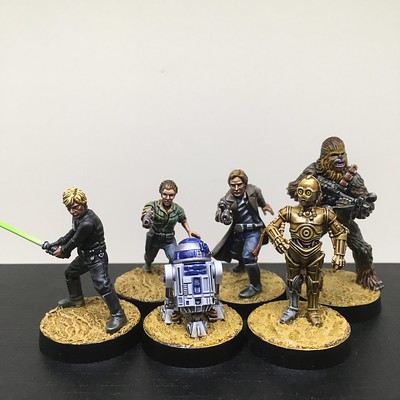 I am really enjoying painting these characterful figures. I have prepared and primed Boba Fett and General Veers, a couple of the villains of the piece, for my next painting sessions. 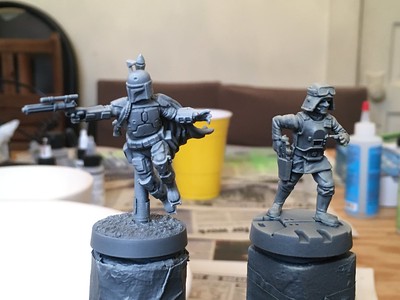 Superb! Artoo is a real smasher but C3-PO looks just wonderful in all his brass and silvery livery.

Sensational job! These look so good.

Great work Dave. 3PO will make a fine target for an orbital strike...