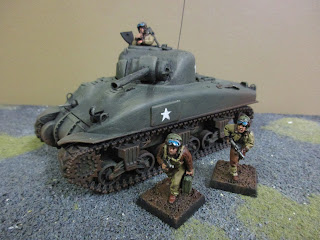 I'd previously posted photos of Perry Miniatures' lovely British and US tank crews, but I'd only finished the half-figures for the hatches. However the brothers Perry even thoughtfully provide two dismounted crew figures in each pack. I painted those the other day and present them here. 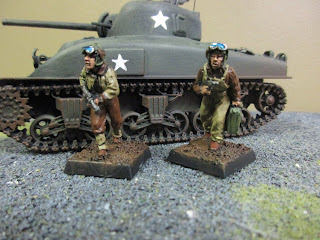 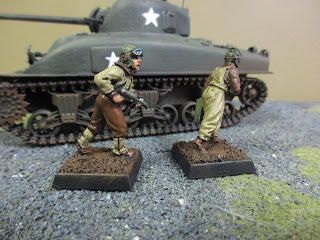 Here are the two GIs - one armed with an M3 "Grease Gun" and the other carrying a jerrycan and .45. The Grease Gunner wears the ubiquitous tanker jacket that was so popular among GIs, while the other tanker wears wool-lined winter combat overalls and wool shirt. 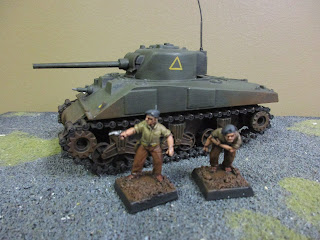 Two British tankers are pictured in front of their Sherman (with Canadian "Fort Garry Horse" markings) that recently got updated as well. The model and its troop-mate are from Solido and were originally equipped with a chunky 105mm main gun. However I recently ordered 75mm turned-brass barrels from RB Models to replace them. The barrels were cheap and fitting them was pretty easy, using a Dremel to cut off the old barrel and drill out a mount for the new one. I think they look much better now. 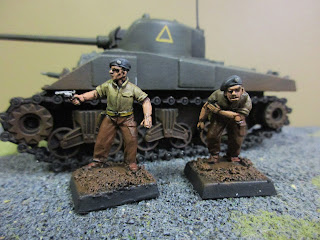 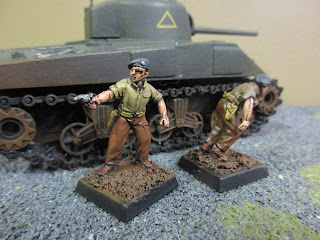 I painted the tankers with tan/drab shirts and wool battledress trousers. They'll fit in pretty much anywhere. Again, these Perry tankers are highly recommended if you need some crew for your WW2 AFVs.

Very nice, haven't seen these before.

Cool. I see some scenario possibilities with dismounted tankers...

And man...those Solido tanks are fantastic, are they not? The combo with the turned metal barrels...great stuff!