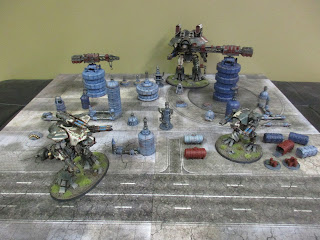 Isolation painting continues… this time it's clearing some terrain off the painting table, as I've finished assembling and painting Games Workshop's new Manufactorum Imperialis set for Adeptus Titanicus. For sixty of our Canadian dollars you get around 30 (!) pieces of terrain to use in your Adeptus Titanicus games. A pretty decent value, in my opinion... especially when contrasted with GW's latest antics... a Terminator Librarian and Sister of Battle two-model "package deal" for $90... come on! 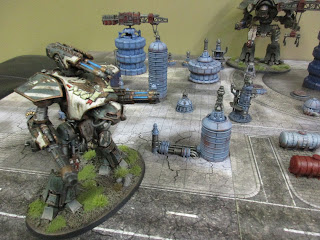 Anyway, back to the topic at hand. I've set out my finished MI set on one of the terrain boards we used for the big New Year's Day game, with some Titans for scale. The card terrain sheets are made by TTCombat for Dropzone Commander and work great for AT also. They're 12" by 12" and four fit nicely on my 2' by 2' MDF boards.

Above, we see a Reaver Titan pictured with some random MI bits. There are several slick little pieces to the MI kit, including several structures with attached pipework, shown at middle above. You also get two cool liquid storage tanks shown at right. 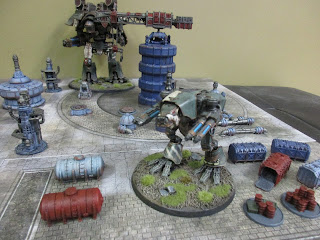 There's a bit more scatter terrain included also - four scale versions of the Munitorum Containers already available in 40K-scale. These are remarkable, including even interior detail! A couple of ammo containers and 12 or 15 barrels round out the scatter stuff. I based these on low-profile round bases from Warlord Games. 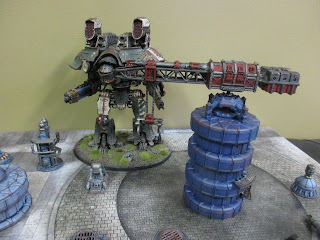 The towers and gantry cranes are probably the coolest stuff you get in the box. There's a longer crane with jaws that can hold a Munitorum Container, and a shorter one with a giant hook - although the kit contains parts for another pair of jaws if you're inclined that way. Just a slight beef though - the attachment of the crane to the top of the tower is just a friction fit, and I wasn't happy with that so substituted magnets, with mixed success. 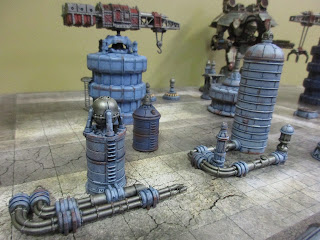 The pipework provided looks super-cool. Painting technique for the models was straightforward - primed black, then most pieces were sprayed with a grey primer paint. I found that Drakenhof Nightshade wash worked quite well to shade the light grey primer and provide a spot of colour, so that's what I used on most of the pieces. 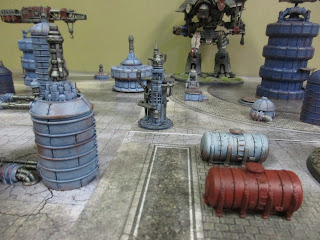 I did some light weathering/rusting on the pieces once the basecoats and washes were done. Rust was applied with a small sponge and Doombull Brown. Rusty streaks were added with a mix of Doombull and Reikland Fleshshade wash, as I found that Reikland by itself wasn't strong enough to give the desired effect. 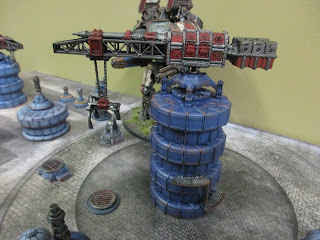 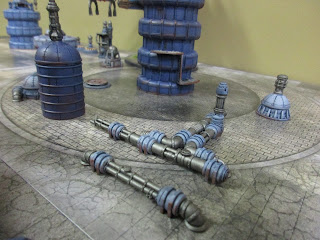 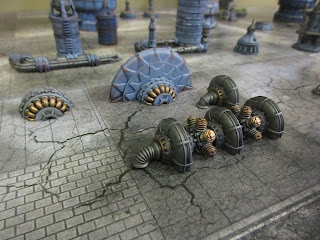 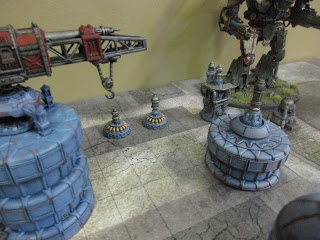 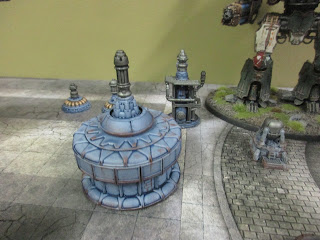 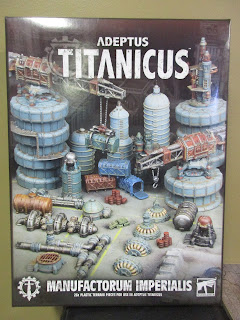 Verdict - an excellent set of small terrain for AT and a decent value to boot. You get enough parts to make LOT of small terrain pieces, and depending on your other ventures in 6-10mm SF gaming, they can have some general flexibility too. We play the old Aeronautica Imperialis game and Epic from time to time, and these pieces will fit in well there as well. So good on you GW, I guess doing this set entitles you to flog a few $45 28mm single models after all :-)

Stay healthy everyone!
Posted by Dallas at 4:58 PM

Looks good. I haven’t been that productive, as I’m an essential worker and grade 1 teacher...apparently!

Looks good and not a bad price for how many pieces you get in the set.
Cheers
Stu

Nice, I might consider them for my collection as you say they are good for 6mm.

Great work, they came out fantastic. I agree it's a great deal and good terrain for the scale. The detail is top notch as we've come to expect.

Really cool Dallas - that will be awesome for both AT18 and Epic, really great.

So great that the one crane set looks large enough to even slightly block a Warlord Titan!