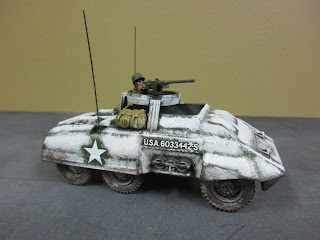 So this project has had a bit of a long timeline... I got this Solido M20 diecast model years ago, probably in a package deal with some other stuff. But once I started on the winter US Army project in earnest I dragged it out of mothballs to paint. 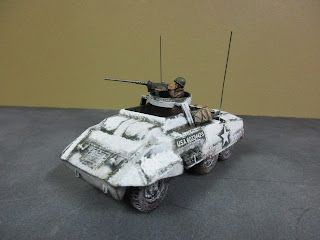 But I needed a crewman for it! After casting around the Internet a bit, I found that Company B produces some very handy vehicle crew models, including this .50 Browning gunner. The model is nice - it actually comes with a .50 cast on in one piece. However, I ended up cutting off the barrel and using a spare plastic one from a Tamiya kit in its place. 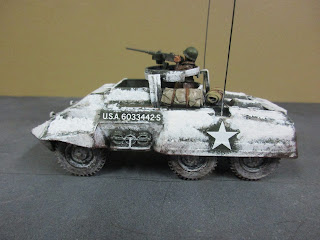 I ordered the gunner and some appropriate decals at the end of February but had some problems with the postal system. It got from Washington state to Canada OK and fast, but once it got to Winnipeg it sat for a week without moving, then suddenly scanned as "delivered"... when it never actually got to my house. 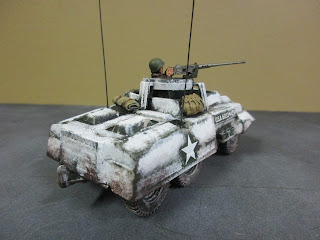 Fortunately Bruce at Company B was great about sending a replacement model. The decals haven't arrived yet though so I used some spares I had left over from the Tamiya M4A1 build. 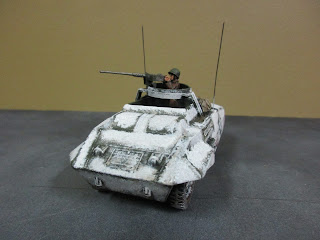 The Solido M20 isn't super-detailed by any means but will suffice for our gaming needs. As noted, it's 1:50 scale so is just a skosh smaller than the M8 Greyhound I'm building (the vehicles shared a chassis) but not enough to notice, really. The M8 is suffering from postal delays too as it's fully built and basecoated but is waiting for its winter tires to arrive from Australia. 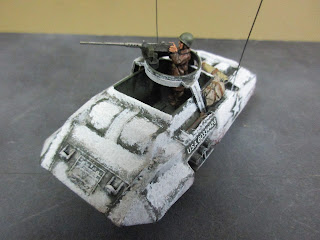 I painted the M20 in my standard US livery - Catachan Green base, then camo'd up with Rakarth Flesh and White Scar stippled on. 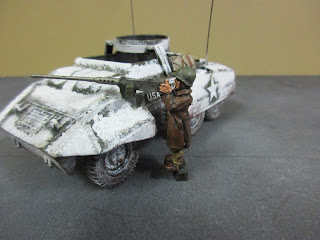 Gunner is good enough to justify a full-length shot. I had to stand him on an ammo box to make him tall enough to fit the M20 interior dimensions. 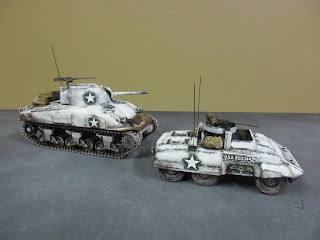 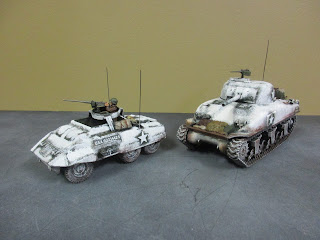 A couple of shots with the M4A1 Sherman to finish off the post. The winter camo is looking OK and I can't wait to get the Greyhound done - it's such a cool looking (and heavily armed) vehicle. I gotta give props to Company B for making the crew model. It's a really niche kind of thing to make, but adds so much to the LCF for our games.

Stay safe everybody!
Posted by Dallas at 1:54 PM

Those both look fab!