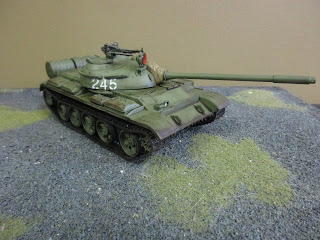 Who doesn't love the T-55?? Workhorse of the Soviet and Warsaw Pact armoured forces for nearly three decades (not to mention a stalwart part of many tin-plated dictators' armed forces even still), the T-55's squat silhouette just bespeaks "Cold War". For awhile now I've had this diecast T-55 sitting in a box, but in a sudden rush of inspiration earlier this week I decided to paint it. 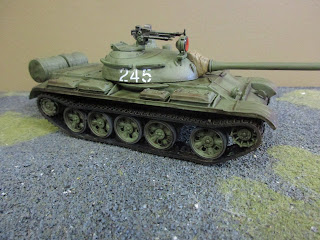 The hull colour is a superb spray - Rust-Oleum Specialty Camouflage ultra-flat green. After removing the tracks, the model was sprayed all over. 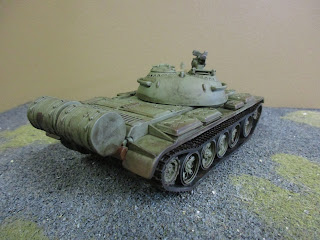 This was followed up with Mechanicus Standard Grey on the roadwheel tires, Leadbelcher on the DshK machinegun, and XV-88/Zandri Dust on the mantlet, then the whole model was washed with Agrax Earthshade. 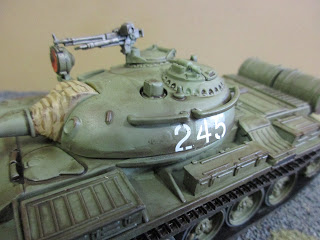 Decals from the GW vehicle sheet were used, and the IR lamp was painted gem-style red. Is that what an IR lens looks like? Who knows, but it looks cool. 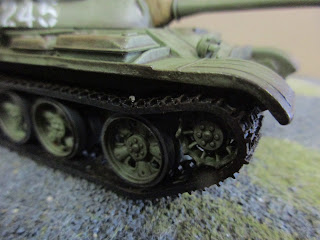 I also tried, for the first time, something I've often thought of doing on tracked vehicle models with stretchy rubber or vinyl tracks. These tend to bug me because the track's top run stretches straight from drive sprocket to idler sprocket and don't "sag" onto the roadwheels like the real thing. So I decided to engineer a solution for that (above). 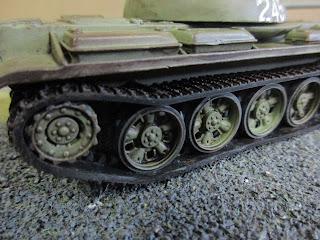 On the T-55 model I drilled holes above the first and last roadwheels on each side, a track's width above the wheels, large enough to fit a stiff wire through. I then ran a wire through the holes and fitted the tracks so they fit between the wire and the roadwheel. This pushes the tracks' top run down onto the roadwheels, giving an impression of sag. Not as good as link-and-length tracks by any means, but works well enough on a suspension setup like the T-55's, or on other tanks like Tigers or Panthers where the upper run of track is supported by the roadwheels. 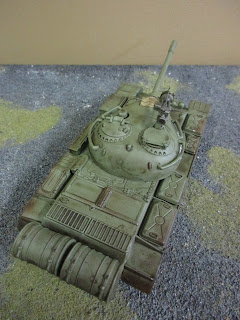 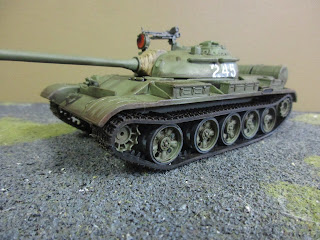 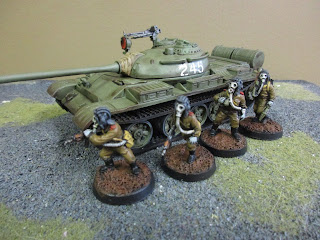 Eureka tank crew make another appearance. Scale of the T-55 looks good compared to these models. 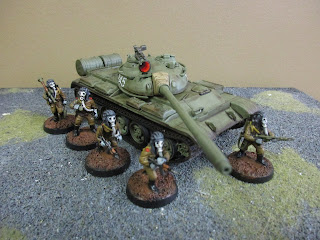 Not sure what kind of game we'd use a T-55 in (as our Cold War 28mm gaming takes place in the '80s or '90s, after the Soviets had pretty much moved on from the T-55), but the model looks good and was really fun to paint. I think the tracks mod worked out OK and I might just use that on other models with vinyl tracks, in future.

Innovative fix on the tracks! I love cheap but effective mods like that. I might have to use that myself with your permission.

No worries Reese, fill your boots and let us know how your work turns out. Thanks for the comment!

This is fantastic Dallas! And no worries...we can certainly have some "reserve" calibre units active in our Cold-War-Gone-Hot gaming. And...this will be great for games in Afghanistan with my Mujahideen!