This has to be some kind of record... my wife got me these Eureka Soviet Tankers in Gasmasks for Christmas and I've already painted them! 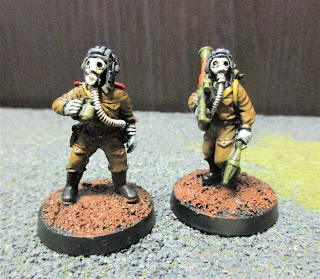 A nice project for a winter's afternoon off from work, to be sure. These Soviets will make an excellent addition to the Chemical Commie platoon already on my shelf. 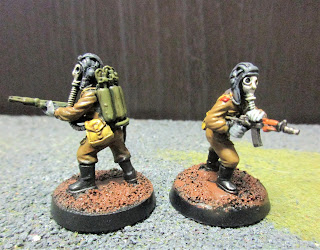 Although they differ from the rest of the mob, not being dressed in full NBC gear, I tried to demonstrate some continuity by giving the tankers grey gloves and yellow webbing, same as their NBC-clad comrades. 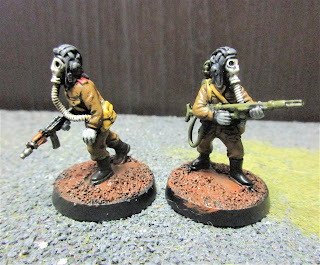 The tankers were painted with Citadel paints: uniforms XV-88, webbing Zamesi Desert, masks and hoses Pallid Wych Flesh, flamethrower and RPG-7 Castellan Green/Camo Green, "wood" Skrag Brown, gloves Mechanicus Standard Grey/Celestra Grey, and helmets highlighted with Mechanicus Standard Grey. Belts were to be Doombull Brown but it was dried up in the pot, so I mixed up something similar from scratch. 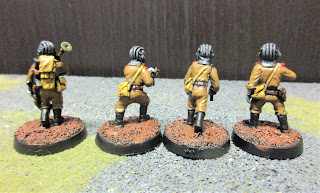 The models were washed with Agrax Earthshade and re-highlighted with the base colours. Done.

These guys are just great little models and have gotten me excited to stage another WWIII game in 28mm!
Posted by Dallas at 10:21 PM

Now that is impressive! These are great.

Some great additions.
A great start to the year.
Best wishes
Stuart

Great job Dallas - and by painting a gift so rapidly, these figures will skip the new-paint-curse and go straight to providing good karma on the battlefield...

Fantastic models, despite the fact that they're wearing gasmasks (or maybe just because they are) they have so much character. Love your work on them and the colours you picked, very well done!

Excellent work on these. I did the same addon to my Eureka MOPP suit platoons. Any plans on adding a Tank for them to crew?

Great idea Dartfrog! I think I have an unbuilt T-72 from the "North Korea Store" on the shelf (don't ask) but these guys might warrant an actual scale kit... does anyone make '80s Soviet armour anymore?