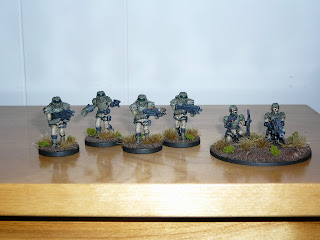 This is a selection of a larger force of about 25 models I painted. They're from Mantic. For the most part they're good, but I found the heavy weapon gunner to be very poorly designed. So bad in fact I would not recommend them. It's nothing that can't be fixed with green stuff and other fixes, but I don't think the pose of this model is so revolutionary that they just couldn't capture it during the manufacturing process. 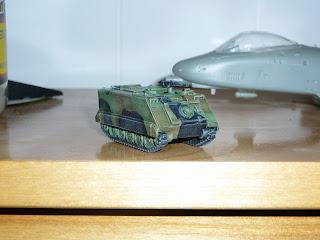 This is Battlefront's M113 from their Tour of Duty line. It's a fantastic model that goes together really well. It's my hope that Battlefront is building up for a Cold War line and Vietnam is just something to get their feet wet. Luckily, the M113 can be used outside of Vietnam as there isn't anything about it that pigeon holes it as 'nam. The above model is a test model for my 1980's Canadians in 15mm. It lacks decals and weathering, but I think the colors are close enough. I also added the road wheel to the front since every picture of a Canadian M113 I've seen has one for some reason. The decals should be arriving soon (after paying an eye-watering amount for them) as should the rest of my Canadian stuff.

Great looking troops. The basing is nice too. Best, Dean

Great stuff Mike. I look forward to helping with the "OPFOR" on your 15mm project...have to say the unpainted model visible in the M113 photo is of concern to any Warsaw Pact player...

I was wondering about those Mantic figs. They've had a lot of Kickstarter action lately, but I hadn't jumped on board that train.

I remember seeing lots of those APCs from the PPCLI driving in and around Winnipeg near the former Kapyong Barracks. Always interesting when one sported a "Student Driver" sign...