As mentioned previously, I have been working on Dystopian Wars fleets.  Basically, on a whim, since I liked the models, and then more so because after playing a few games, love the rules.

I started with the French back in March, but also had a British fleet to get painted.  If for no other reason than what better factions to face of against each other than ones with such a long standing antagonistic history.

Better yet, the colour contrast would work well between the French and British as I could play around with the British "Dazzle" camo scheme from WW1. This is the typical Dystopian Wars British paint scheme and one that can look amazing when done well (see Curt's British Fleet for a great example). 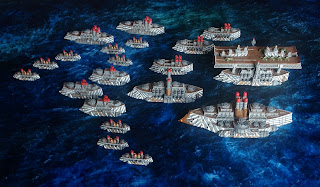 Again, the quality of the castings and resin that Spartan Games puts out is amazing.  Almost no cleaning was required, almost no mold lines on any of the ships, and clear details on all. Just like the French fleet, every ship was almost perfect, with no bubbles or defects.
The Dystopian Wars universe is very similar to our own in many ways, and the British have a great real world feel to them with several rules that remind me of the British and several appearance elements that work as well. 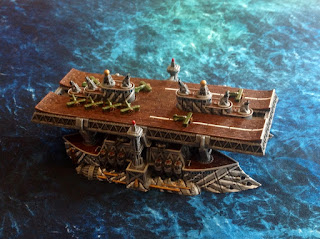 One of the great items I love about the British fleet is their aircraft carrier.  It is very British to be lacking something so just bodging it together from what is at hand.  This is shown by how the carrier is constructed. They didn't have a hull big enough at the time to support a aircraft runway, so they took two battleship hulls, and essentially bolted them together and put a runway across both of them!

Another great British element is the number of torpedoes that they can put in the water.  Many of the ships have banks of torpedoes to the fore, port, and starboard!  Some ships even have torpedo turrets that can launch them out in the direction required rather than in a fixed channel. 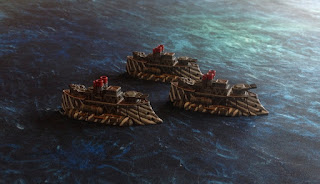 To back up the British fleet there is the huge dreadnought that has 6 turrets, broadsides, torpedoes, shield generators, and more. 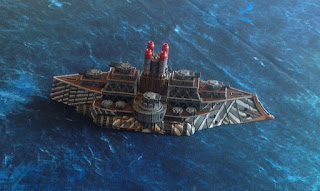 They also have battleships and heavy support destroyers that put out massive firepower, especially compared to the French. 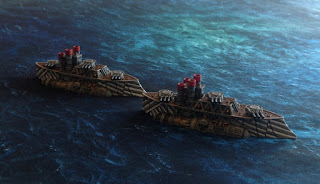 The ships painted up extremely quickly, and look really good at the tabletop level.  Up close some details fall apart, but I find it's always a trade off at these small scales.  Do to little and they don't show anything, do too much and they look messier rather than better.  I still need to decide on and paint emblems or flags or something, but not sure what to do so that is still waiting.  They are perfectly playable as is. 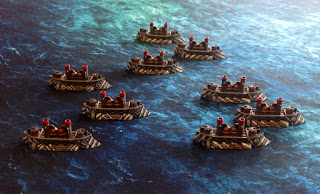 Now that these are done, it's time to book a game here in the next little while.  It's also time to go back and finish some more French, as my secondary fleet is now bigger than my primary fleet...

They are quite beautiful Bryon!

Byron these look excellent and I think your 'dazzle' is exceptional at this scale and gives a real feel to the force. Can't wait to see these up close in person.

Again I see that these ships look excellent, your painting just makes them look so good but again it's just something I know I won't play.

Looks fun though, none the less

I like the dazzle camo. Looks very good at this scale.