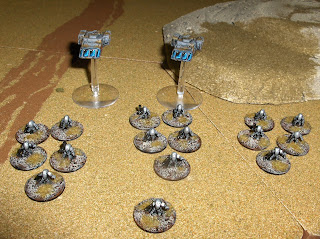 Last Thursday Greg, Indo and Dave V. came by for the game. Greg had come up with a scenario - rules were the excellent one-page "FUBAR" SF skirmish set, scale was 6mm (!), the game would continue the loose narrative campaign that we'd been creating.

Greg had proposed the title "Raid on Orktebbe" and that got my imagination fired up... it had to be the Spooky Corporate Mercenaries making a daring raid on an Ork-held spaceport facility! The SCM's rolled in with three squads of five models, led by a "senior vice-president". Each squad had an RPG in addition to assault rifles and the squad leader's LMG. 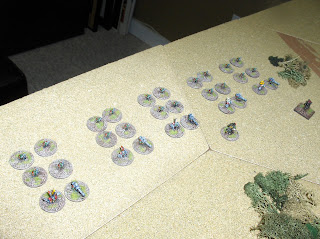 Here's the Orks - there was a ton of them - mostly boyz, but led by a scary tooled-up leader and accompanied by a Killa Kan. Indo and DaveV. ran these guys and I took my SCMs. 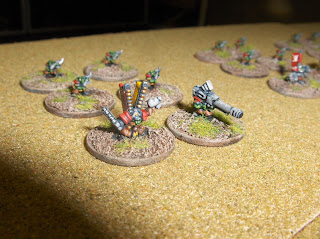 The Boyz squads were salted with heavy weapons too. 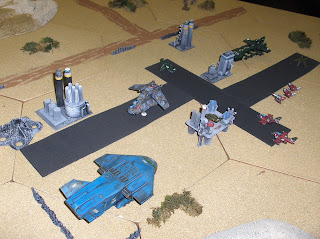 Here's the table layout. The Orks had hijacked the camo-painted aircraft sitting on the runway, and the SCM's were tasked with recovering some indeterminate item of value from the plane. One SCM trooper would need to spend a turn next to the aircraft to make the grab, then get off his home table edge, all in the 10-turn limit. 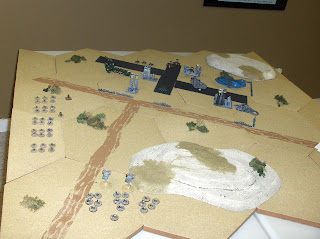 Satellite image - two squads of SCMs and their leader deployed at bottom, and the other squad was dropped at the middle top. 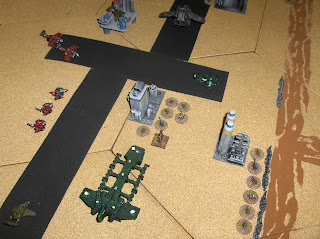 Here's the Ork deployment around the objective. 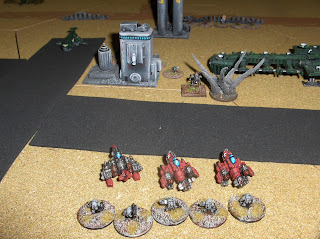 SCms advance to cover behind the Ork interceptors, and exchange fire with the Killa Kan (middle top beside the explosion marker). 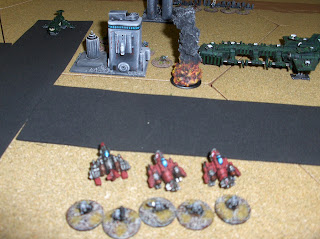 And KABOOM! - concentrated SCM fire power blows up the Kan. 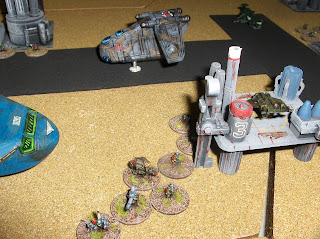 More Orks rush towards the fighting, including "The Boss". 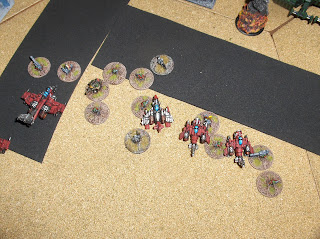 Boss and boyz get stuck into close combat - due to some appalling die rolling by me, this spelled the end of the SCM squad. 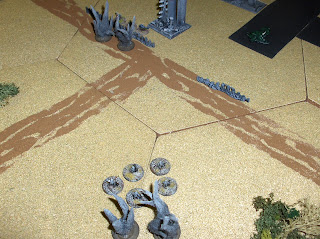 On the other table edge the SCMs were making good progress... 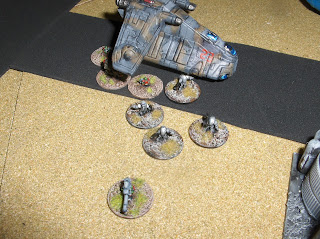 I guess it was about Turn 5 or 6 that the first SCM trooper reached the objective. Unfortunately the Orks arrived just after and close combat ensued, not all to the SCMs' favour. 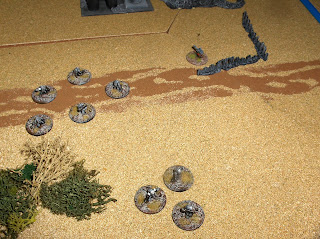 However, after a bloody combat the SCMs got things under control and withdrew with haste towards their table edge. The three models at bottom are carrying the objective item, the five at upper left are running interference from the remaining Orks. Note Ork lone-nut assassin at centre right, the only survivor of his squad. 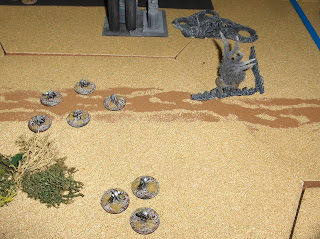 A brief pause to obliterate the lone-nut assassin! 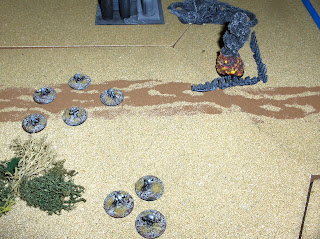 With a comprehensive explosion! (I think the SCMs scored something like 10 hits on him in one round of shooting) 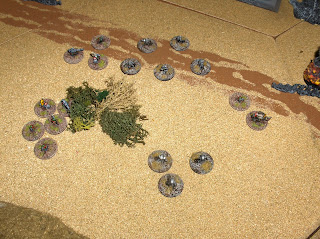 Everything appeared to be well in hand for the SCMs and they were withdrawing in good order with all Orks outside charge range. However Dave V. and Indo surprised with a bold move - running all remaining Orks up at full speed, gambling that they would win Initiative. 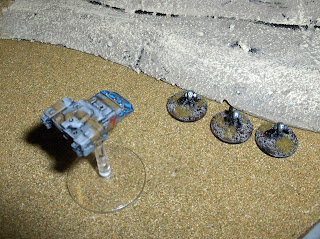 The first three SCMs made it to dust-off - mission accomplished. 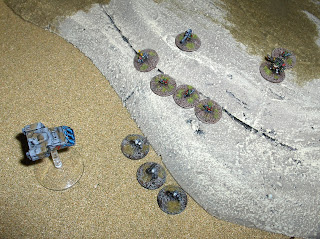 But it was close! 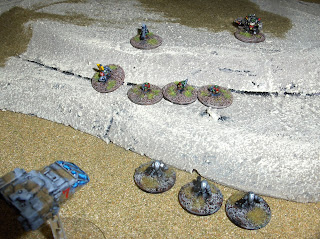 What an exciting game. FUBAR is a great little system, and we've made a few tweaks to make it run a bit more to our liking. One of them is the "free activation" that can be used once each turn even if the die roll fails. Speeds the game along and keeps lips from getting too pouty (speaking for myself). I love playing with these li'l individual 6mm guys and I think the game looks really cool. Thanks to Greg for running it and to the guys for coming out!
Posted by Dallas at 10:42 PM

What a neat idea. That seems like it was a fun scenario to play.