Prairiecon 2013 took place in the lovely city of Brandon, Manitoba last weekend.  Once again the Conscripts made a solid show of force, running and participating in games in other events over the weekend.  Dallas ran a Star Wars: Fleet Battles game Saturday morning, and I ran a game of Tomorrow's War Saturday night.  Here is a report on the Tomorrow's War game.

The scenario was set on some un-named dusty colonial world of the distant future.  Once again, the minions of everyone's favourite future company - Binary Petroleum - had been trapped in a dangerous place, shot down in an area of abandoned industrial facilities.  Colonial troops are dispatched to recover the survey team, and a group of Sludge Truther Rebels has the same idea.  Cue the firefight! 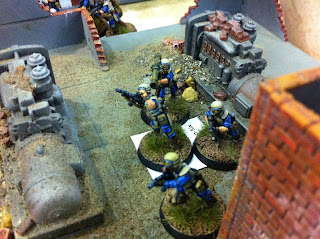 The table was 4' x 4', filled with Dallas' awesome Stalingrad ruins, with a few added modern touches, including some new sponsor logos (more about that later).  The Colonial troops were composed of the amazing Frank Hammond science fiction troopers.  The Colonials had four five-man fire teams, two with LMGs, two with rocket launchers, and a small command element featuring a medical bot and a sniper rifle.

The Sludge Truther Rebels were represented by the excellent Pig Iron Kolony Rebels, and a couple of Pig Iron Kolony Ferals. They were organized into five-"man" "slurms", and a small command element (boasting the guidance of "The Known One"). As we frequently do in the Ambush Alley games, the two sides started very close, and in Tomorrow's War weapon ranges are not relevant, so the battle would come fast.


The victory conditions were based on the recovery (or, in the case of the Sludge Truthers, I should say "recovery") of the VIPs.  There were four of them, and they started the game right in the middle of the table.  Each fire team could only recover one VIP at a time.  If you evacuated or held a VIP at the end of the game, you got a victory point.  And, of course, accidents happen, so these, er, "incidents" would shape the number of victory points available.

Mike F and I played the Colonial troops.  Dallas and Cam played the Rebels.  Early on, the Rebels made excellent progress - I blew a reaction role and lost most of one fire team in the first turn!  Meanwhile the shifty opposing slurms grabbed a couple of VIPs.


But we started to turn the tide! Mike won a number of initiative rolls, and our fire started to really hurt the Rebels.  Mike got one of his fire teams into a position that could cover the Rebel exit points very well, and the rebels bogged town.  Two more of our fire teams closed in on the remaining VIPS.  Toss in an - er - "incident" depriving the Rebels of a VIP, and it was looking very, very good for the Colonial side...


And then...and then...in the space of three die rolls, it was over.  One of our VIPs was, um, "lost to a kinetic incident" in a fashion that may, or may not, have involved some of our own weapons.  Dallas then got the drop on my last fire team, meaning the Rebels broke free of their pinned position and buggered off the table with a VIP.  Since the other three VIPs had encountered "issues", that meant a win for the Sludge Truthers!

In all we played about six turns, but with the Ambush Alley system, there is a lot of interaction and the exchange of fire was very involved.  In one turn Cam's cover "Slurm" fired so much he actually ran out of dice.  Gun barrels were melting on both sides.

A big thank you to Dallas for lending out his excellent Stalingrad terrain for the game, and to Dallas, Mike F and Cam for joining in during the game.  It was a lot of fun, and we drew a healthy crowd of onlookers for the battle.


I also want to thank Conscript Kevin H. for the ace work he did putting together the corporate logos for our game.  It is good to know that Binary Petroleum and Stellarbank will have a nice brand to add to our science fiction game settings!  Stay tuned for a report from Dallas on the Battle of Endor...
Posted by Greg B at 12:38 PM

Nice AAR Greg, accompanied by excellent pictures of well painted minis and terrain- what more can be said?

I love the corporate sponsor logos!